The Investment in solar capacity has fallen in the first half of 2020 by 12% year-on-year due to the COVID-19 pandemic.

Investment in new solar capacity fell in the first half of 2020 by 12% year-on-year to US$54.7 billion as the COVID-19 pandemic hit both project financing and scheduled auctions.

New analysis from BloombergNEF showed that while total investment in new renewable energy rose by 5% in H1 2020, this was driven by a four-fold increase in offshore wind financing, which – at US$35 billion – saw more investment during the first six months of the year than it did in the entirety of 2019 (US$31.9 billion).

Solar investment, while somewhat resilient in the face of what’s been described as the biggest economic shock to the power sector since the Great Depression of the 1930s, recorded a 12% fall year-on-year. Albert Cheung, head of analysis at BNEF, said it was expected that the pandemic would impact H1 investments due to delays to the financing process of new projects as well as postponements to specific auctions.

“There are signs of that in both solar and onshore wind, but the overall global figure has proved amazingly resilient – thanks to offshore wind.”

Brazil’s A-4 auction, which prompted bids from nearly 29GW of utility-scale solar installations, was postponed indefinitely as a result of the pandemic while Portugal pushed back its auction to last month, having originally intended to host the 700MW tender in late March.

There was brighter news for solar in BNEF’s analysis of public markets, however, with the two biggest deals in H1 2020 being the initial public offerings of JinkoPower Technology and Trina Solar, which raised US$366 million and US$359 million respectively. 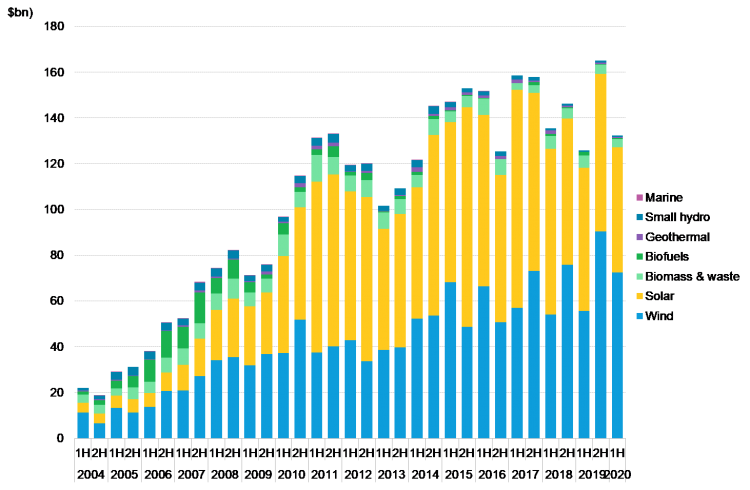 BNEF’s analysis adds to a growing consensus that while there will be inevitable impacts on clean energy investment and deployment this year from the pandemic, they are more temporary than terminal and the sector has proven resilient.

In May, the International Energy Agency said that the crisis was “hurting but not halting” renewable energy as it revised its forecasts for the year, expecting ~90GW of solar power to be deployed in 2020 against an original forecast of 106.4GW.

Last week Mercom Capital’s analysis of corporate solar power funding found that it had fallen by 25% year-on-year to US$4.5 billion in the first half of 2020, however chief executive Raj Prabhu said the impact “could have been worse” considering the nature of the pandemic and the scale of its impact on global economies.