Sunrun has been the leading home solar installer in the United States for quite a while now, and it was just announced hats they have agreed to terms to acquire the solar company Vivint Solar. 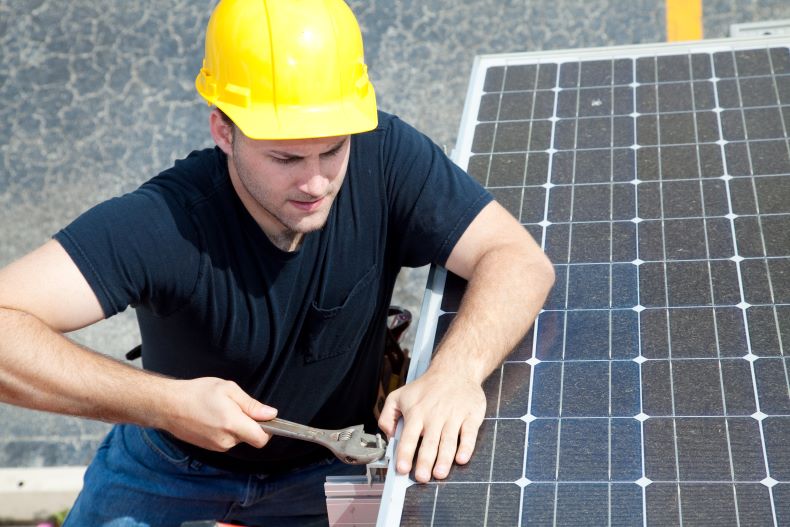 Sunrun plans to buy Vivint Solar for an enterprise value of $3.2 billion, a price tag that rivals that of other high-profile clean energy acquisitions: Tesla bought SolarCity for $2.6 billion in 2016, while Google acquired Nest for $3.2 billion in 2014.

The stock-for-stock deal will grow the portfolio of Sunrun, already the nation’s top home solar installer, to more than 3 gigawatts and around 500,000 customers. That would make Sunrun the third largest owner of U.S. solar capacity across all market segments, and the solar company sees a clear path to the number one spot, company officials said.

Sunrun and Vivint Solar held a combined 17.5 percent share of the U.S. residential solar market in 2019, according to Wood Mackenzie. The number three player, Tesla, had a 4.6 percent market share.

The acquisition would roll together two companies with significantly overlapping business models and similar visions for a distributed energy future. Though Sunrun and Vivint Solar have slightly different geographic coverage areas, both install rooftop solar across much of the country through leases, loans, and direct sales.

"We have big ambitions for what we can accomplish together," Sunrun CEO Lynn Jurich said Tuesday on a call with analysts and reporters. "We are only scratching the surface of our opportunity; today only 3 percent of [U.S.] households have made the transition to home solar."

"At a larger scale, with more customers and a lower cost structure, Sunrun will be a meaningful contributor to a fully renewable and electrified energy system," Jurich said.

Sunrun and Vivint compete with a few other national solar installation companies, such as Tesla and Sunnova, as well as a long list of smaller regional or local players.

The market cheered the news, with Sunrun shares surging more than 20 percent on Tuesday morning, reaching an all-time high of around $26. Vivint Solar's shares were up more than 35 percent.

Cost efficiencies will be critical to expanding residential solar markets in the mid-2020s as the solar investment tax credit steps down, said Ravi Manghani, WoodMac's head of solar. "While it will be months if not years till the outcome of the proposed acquisition will be clear, I do think there’s something in here, strategically speaking."

"Vivint, with its direct sales channel and healthy margins on system sales, offers Sunrun an expanded canvass and an opportunity to capitalize on higher storage attachments and grid services plays, all while potentially improving operational and financing costs," Manghani said in an email.

Based on July 6 stock prices, when the deal was announced, the combined solar company would have a market capitalization of $4.5 billion, and an enterprise value — or market capitalization plus debt — of $9.2 billion. Vivint shareholders would exchange their stock for 0.55 shares of Sunrun, giving them a 36 percent stake in the company.

The boards of both companies have approved the sale, though stockholders and regulators must still do so. Sunrun expects the deal to close in late 2020. Vivint Solar CEO David Bywater would join Sunrun's board.

This isn't Vivint Solar's first dance with a larger renewable energy company. SunEdison offered to acquire it for $2.2 billion in 2015, but that deal fell apart amid the larger unraveling of the would-be renewable energy supermajor in March 2016.

The two companies have adopted different strategies in some business areas.

California-based Sunrun has positioned itself as an early leader in residential storage sales, reporting in its last earnings call that more than 60 percent of its customers in California’s Bay Area now choose to add batteries to their solar installation. Though the rate is lower in other places, Sunrun has installed more than 10,000 of its storage systems and is at work on plans to network those customers into virtual power plants in Hawaii and ISO-New England. Jurich suggested Vivint customers could help Sunrun build out future networks.

Utah-based Vivint, meanwhile, has a strong ground game and has long been a leader in door-to-door solar installation sales — a distinction that has caused it some trouble in the past due to consumer complaints.

"We've been incredibly impressed with David and the team's commitment to the highest quality sales consultation process and installation quality," Jurich said on the call.

The combined company believes it will be able to save $90 million a year in expenses. More than 95 percent of Vivint's branches are in similar locations as Sunrun's, and half are within 10 miles. Sunrun can eliminate one-third of the total physical locations between the two companies, saving on rent and overhead, Sunrun CFO Tom vonReichbauer said. The combined solar company could also save money by consolidating IT platforms and getting better deals buying solar and storage equipment.

"As this process has progressed, it has become increasingly clear that the combination of Vivint Solar and Sunrun is the best way to create value for consumers, shareholders, and our partners," Vivint CEO Bywater said on the call.

Cost efficiencies aside, Austin Perea, senior solar analyst at Wood Mackenzie, said the acquisition does nothing in the immediate term to address one of the residential solar industry's biggest challenges: bringing down its persistently high customer acquisition costs.

"Sunrun has said that they are looking to Vivint’s direct sales channel to help support their growth, but most active national players have been moving away from door-to-door sales, in part because it is the most cost-intensive customer acquisition channel," Perea said.

"That said, and as Tesla is proving out to varying degrees of success, the biggest driver for reducing the cost of customer acquisition in the long-run may just be pure brand equity and household recognition," Perea said. "With Sunrun’s market share expanding considerably with Vivint’s acquisition, becoming the juggernaut of residential solar may be the key to long-term growth, especially when paired with higher solar-and-storage attachment rates and the long-term grid services play."

The acquisition comes at a difficult time for the U.S. residential solar market, which was sent reeling by coronavirus-related shutdowns this spring. Many companies reported anemic sales in April, with a slight improvement in May. Installer PetersenDean filed for bankruptcy protection in June. With the virus now growing at an alarming rate in many states across the country, it’s unclear if further shutdowns or infections will hamper solar installations or sap consumer demand.

Sunrun, which began selling a limited-time $1 per-month solar contract in April, has claimed that its product is “countercyclical” and able to weather an economic downturn. But ultimately, Jurich said, Vivint “adds an important and high-quality sales channel that enables our combined company to reach more households.”

And that’s the goal for any solar company —,, especially in a crisis.