Enphase Energy Revenue and Shipments Peak at the End of 2019

Microinverter solar company Enphase Energy has reported a boost in both shipments and revenue in the last quarter of 2019. With the newer supply deals in the US and Europe expected to grow even more.

Enphase Energy Revenue and Shipments Peak at the End of 2019

Microinverter supplier Enphase Energy reported yet another jump in both shipments and revenue in Q4, with recent supply deals in the US and Europe expected to grow sales even further.

The solar company also said that while the coronavirus outbreak in China was not expected to have a major impact on its operations in Q1 2020, it was preparing to expedite product shipments through air freight depending on how the logistics situation in the country materializes.

Enphase confirmed shipments for the three-month period ended 31 December 2019 to have stood at more than 2.1 million units, equivalent to ~677MW (DC) of microinverter shipments. 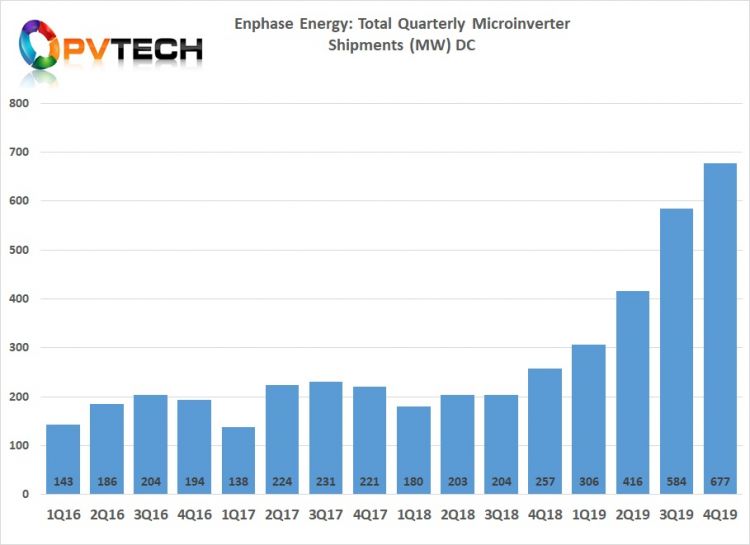 This constituted a 17.6% sequential leap on the ~1.8 million microinverters shipped in Q3 2019, leading to a spike in quarterly revenue to US$210 million. Q3 revenue for the California-headquartered firm stood at US$180 million, while revenue in Q4 2018 stood at US$92 million. 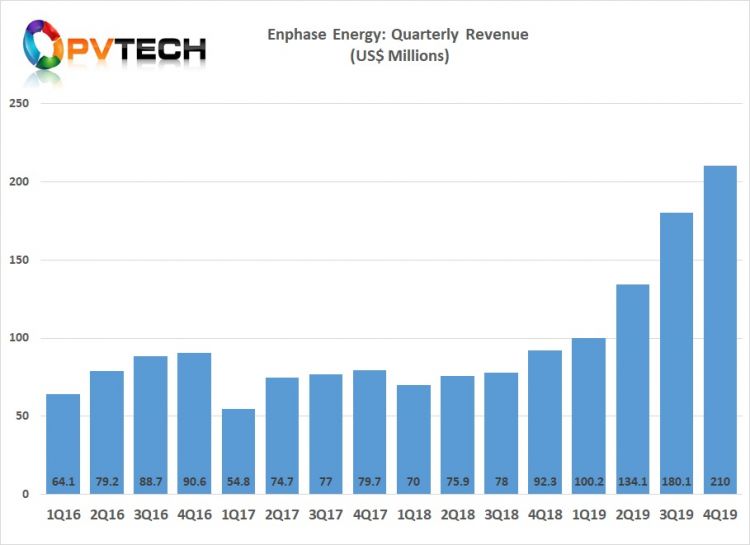 The significant majority of Enphase’s revenue (92%) continued to derive from the US, with international revenues amounting to 8%, despite “excellent progress” being made in Europe.

Those quarterly figures were enough to send full-year revenue to US$624.3 million, nearly double the US$316.2 million Enphase recorded in 2018.

And the company expects that growth trajectory to continue into 2020 on the back of a handful of supply deals lined up since the start of the year.

The company is now guiding towards revenue in the region of US$200 – 210 million for Q1 2020, including US$44.5 million worth of revenue from ITC safe harbor shipments.

He added the solar company had been left pleased by pre-order numbers and had been ramping up installer training in anticipation of the product launch.

In a conference call with analysts held after the results announcement, Kothandaraman did not provide specific figures for the firm’s Q1 2020 shipment guidance, but stressed it was “fully booked for the first quarter to the midpoint of guidance”.

The firm’s Q1 guidance therefore, including safe harbor shipments, will reflect a base revenue drop of around 8%, a result which Kothandaraman described as “pretty good” considering seasonality.

Kothandaraman also spoke candidly during the conference call about the impact of the recent coronavirus has had on the company’s activity since the turn of the year. He stressed that while the solar company remained cautious of the virus and was watching its impact carefully, Enphase do not see it having a “big impact” to Q1 performance at this stage.

He said that while the firm’s contract manufacturing facility in China is now steadily ramping back up to capacity following the Chinese New Year, coupled with its component supply chain, Enphase is seeing “some indications” that outbound logistics from China are constrained by the virus outbreak.

This could, however, lead to the firm needing to expedite some product through air freight from China and preparations were already underway should that need arise.

That echoes with what other solar power component manufacturers have said, including the likes of Korea-based Hanwha Solutions, who last week confirmed that two major solar module assembly plants had been temporarily shut down as a result of raw materials and component shortages emanating from China-based suppliers.