JinkoSolar does it again! With an outstanding year-over-year solar module shipment growth of nearly 3 GW, making it the back-to-back top solar company for solar panel sales. 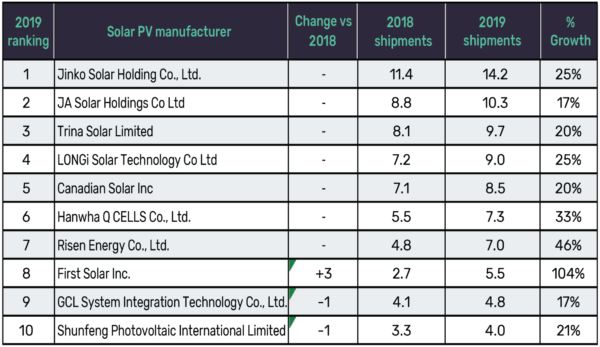 Jinko shipped 14.2 GW of solar modules in 2019, compared to 11.4 GW in 2018 for the overall growth of 25%, according to the latest ranking produced by U.K. consultancy GlobalData. For context, that growth factor was equivalent to the entire capacity of solar modules First Solar shipped in 2018, at a point when the U.S. solar panel manufacturer shifted the 11th highest volume of solar modules worldwide.

The seven biggest solar module companies last year were all unchanged from 2018 as Chinese manufacturers continued to dominate. The only outsider among that bunch was again South Korea’s sixth-placed Hanwha Q Cells, which shipped 7.3 GW of solar modules for a 33% increase, year on year. Chinese suppliers were so dominant, in fact, of the 80.3 GW of solar modules shipped by the world’s biggest 10 solar companies, 67.5 GW were shipped from China – 84%.

To look at it another way, if Hanwha and First Solar are removed from the list, their Chinese peers still shipped more products last year than the 63 GW moved by the entire top ten solar panel manufacturers in 2018.

Arizona-based First Solar may sit eighth in the list but the U.S. solar company saw by far the largest percentile jump of any business in the top ten, increasing solar panel shipments by 104% last year to vault from 11th place in 2018.

Ankit Mathur, head of power practice at GlobalData said there is little chance much will have changed by this time next year.

“Chinese manufacturers will continue to dominate as the overall leader in solar installations in 2020 as newer emerging markets in Southeast Asia, Latin America and the Middle East mark their presence on the solar map as demand centers,” said the analyst.