California Solar Mandate May Not Be a Mandate After All

Last year California became the first state to mandate that all new homes must have solar panels, but the California Energy Commission has given home builders the option of supplying solar power from an off-site facility.

California Solar Mandate May Not Be a Mandate After All 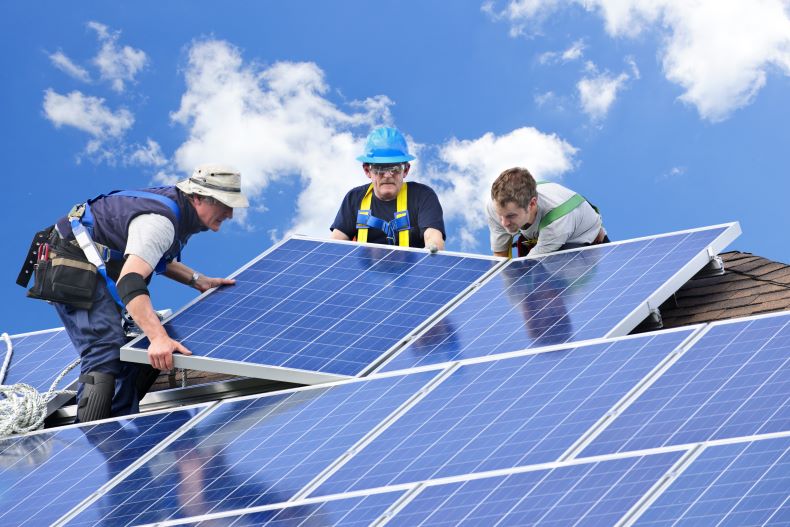 But it’s starting to look like the mandate wasn’t quite a mandate.

The California Energy Commission also gave home builders the option of supplying solar power from an off-site facility, mollifying critics who said rooftop solar panels would raise the cost of housing. Now the commission is poised to approve the first off-site solar power program for new housing — over the objections of home solar installers, who say the agency is creating an escape clause so broad it could render the rooftop solar panel installation requirement meaningless.

Under a proposal from the Sacramento Municipal Utilities District, home builders could choose to take credit for solar electricity generated by existing solar farms, instead of building houses with rooftop solar panels. Homeowners or renters would receive guaranteed energy bill savings of at least $5 per kilowatt of solar power a year, or about $20 annually for a typical household.

Rooftop solar installers say the program would be a bad deal for many consumers. The California Energy Commission estimated its rooftop solar panel installation requirement would save the average single-family home about $35 per month, with mortgage payments rising but energy bills falling even more.

Rooftop solar panel installations reduce the need for utility  investments in the power grid, which are paid for by ratepayers. When paired with batteries, rooftop solar panels can also help homes and businesses keep the lights on during a blackout — a growing concern as utilities shut off power to prevent wildfire ignitions.

California Energy Commission staff recommended that the five-member commission approve the Sacramento program, which is slated for consideration Wednesday.

If that happens, other utilities probably would follow suit with similar proposals, said Benjamin Davis, a staffer at the California Solar & Storage Assn., an industry trade group.

“This will be the end of the new home solar mandate as we know it,” Davis said.

The Energy Commission voted in May 2018 to require that most new single-family homes, as well as multifamily residential buildings up to three stories, be built with solar panels. But the commission also offered an alternate route to compliance, saying utilities, home developers, solar companies, government agencies or other entities could propose “community solar” programs that would offset the need for rooftop solar panels on new construction.

The Sacramento Municipal Utility District, which serves most of Sacramento County and parts of Placer and Yolo counties, said that’s exactly what it’s trying to do.

The public utility, known as SMUD, has proposed using 160 megawatts of existing solar farm capacity — plus 173 megawatts from two solar energy projects currently under development — to supply new homes. There would be no cost to builders who choose to take advantage of that power.

Tim Tutt, an SMUD program manager for regulatory affairs, said the utility is trying to lower costs for its customers by giving them more options.

“We think it’s a benefit to have competition,” Tutt said. “Builders will have choices, and the rooftop solar industry and others will have to adjust.”

That kind of flexibility is what the Energy Commission had in mind when it crafted the home solar requirement, Commissioner Andrew McAllister said.

McAllister said he still expects plenty of developers to build new homes with solar panels, because the technology provides significant long-term cost savings to buyers and is getting cheaper all the time. But he pointed out that the state’s overriding policy goal isn’t to promote rooftop solar panels — it’s to reduce planet-warming carbon dioxide emissions by replacing fossil fuels such as coal, oil and gas with climate-friendly energy sources.

McAllister acknowledged that off-site solar farms don’t offer homes all the same benefits as rooftop solar panels, or — in the case of SMUD’s program — the same energy bill savings. But they do contribute to the fight against climate change, and they might help keep housing prices down, he said.

“We don’t want to be in the business of mandating things that are going to limit the marketplace,” McAllister said in an interview. “We want to encourage the marketplace.”

In part, that’s because SMUD’s program wouldn’t require any new solar panel installations to be built for the foreseeable future. The two solar energy projects under development already have contracts from the Sacramento utility and would have been built anyway.

“Global warming is an existential threat,” Davis said. “We should be doing a full-court press on every front to install as much solar as we can.”

“It’s a utility-scale project,” Umoff said. “We don’t think that’s compliant with the spirit of the community solar requirement as we understood it.”

At least 16 home developers submitted comments to the Energy Commission urging approval of SMUD’s proposal. So did the California Building Industry Assn., whose technical director, Robert Raymer, wrote that approval is “desperately needed” ahead of the solar energy requirement taking effect on Jan. 1, 2020.

“It is vital that the program is certified to send the message to others who may be considering submitting their program that the process is fair and can be navigated to a successful conclusion,” Raymer said.

Dozens of solar company employees have submitted comments arguing the program “is a threat to the solar mandate not only in Sacramento, but across the state.” Nonprofit advocacy groups including the Solar Rights Alliance and Vote Solar have also asked the commission to reject SMUD’s proposal.

Solar energy advocates are worried other utilities will follow SMUD’s lead, in part because the utility industry has traditionally been hostile to rooftop solar power.

Public utilities such as SMUD, which is governed by an elected board, don’t have a profit motive. But like their privately owned counterparts, they’ve long argued rooftop solar panels creates an unfair “cost shift” from customers who can afford rooftop panel installations to customers who can’t.

The more homes go solar, the argument goes, the more rates will have to rise for everyone else to pay the costs of running the grid — a notion disputed by the solar power industry, which says rooftop solar lowers grid costs.

“When rooftop solar gets put on, it does reduce revenue for SMUD, and it doesn’t necessarily reduce our cost,” he said.