Can Surface Treatments Push Perovskites to Commercial Stability in Solar?

Perovskites offer lower costs, shorter payback times, and higher efficiencies than silicon-based solar panels - however, they're unstable under outdoor conditions required for solar systems. Researchers are now looking at surface coatings as a way to make the material a more resilient, viable option for commercial use. 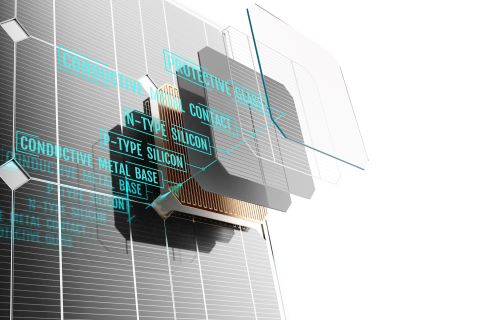 Can Surface Treatments Push Perovskites to Commercial Stability in Solar?

Lower costs, shorter pay back times and even higher efficiencies than pure silicon – the promise of perovskites for solar cells may sound too good to be true, and so far it has been. Perovskites are unstable under heat, oxygen, moisture, electric fields and light irradiation – a catalogue of sensitivities that are quite catastrophic for solar cells that need to be exposed to the weather to harness sunlight into electricity.

Unsurprisingly a vast number of groups around the world are avidly researching ways to improve the resilience of perovskites. These efforts include two recent papers in Science reporting different types of surface treatments that go some way to help stabilize perovskites under exposure to sunlight.

Jinsong Huang alongside Shuang Yang and Shangshang Chen at the University of North Carolina at Chapel Hill and University of Nebraska–Lincoln in the US, and colleagues in the US and Italy, focused their attention on organic-inorganic hybrid lead halide perovskites, including CsFAMA and MAPbI3, where FA is formamidinium and MA is methylammonium.

“This was not an experiment by design,” Huang tells Physics World, as he describes how they had initially thought about using sulfate ions to passivate the defects that both inhibit the power conversion efficiency and foster degradation. “However we found some interesting phenomenon during this study which shows these 'passivation ions' to be different from many other passivation molecules we have been studying in the last five years.” They had discovered that these ions react with perovskites forming a white product that remains insoluble in many solvents. By unravelling the reactions and mechanisms behind the product formed they demonstrated its effective use as a capping layer.

The lead oxysalt layer they formed binds strongly to the perovskite surface and protects it from the detrimental effects of stimuli in ambient atmosphere and light conditions. Following extensive studies of device performance and the activation energy at the surfaces of the perovskites, Huang and colleagues conclude that the strong bonds immobilize surface defects such as vacancies, suppressing ion migration. As a result, the efficiency of the solar cell increased to 21.1% for CsFAMA perovskite compared with 19.16% for the control, and it maintained 96.8% of the initial efficiency after operation at maximum power under simulated air mass (AM) 1.5 G irradiation for 1200 hours at 65°C. In contrast the efficiency of the control device plummeted from 18.2% to 8.54% after testing for just 474 hours.

A collaboration of researchers in China, Switzerland and Japan focused their efforts on CsPbI3. Yixin Zhao at Shanghai Jiao Tong University, Ibrahim Dar and Michael Grätzel at Ecole Polytechnique Federale de Lausanne (EPFL) in Switzerland and Yabing Qi at Okinawa Institute of Science and Technology Graduate University in Japan led the project.

At around 15%, the power conversion efficiency of inorganic lead perovskites is lower than their inorganic-organic hybrid counterparts, primarily because of the larger bandgaps. While the bandgap of CsPbI3 is more promising, its instability isn’t. However Zhao, Grätzel, Qi and Dar, and their co-workers were able to grow stable CsPbI3 with a crystal microstructure described as β- CsPbI3 through a facile solution chemistry deposition. They then coated the perovskite in choline iodide (CHI) and here the fact that CsPbI3 is purely inorganic has advantages.

“The CHI can penetrate through the CsPbI3 film because the CHI would not react with CsPbI3but may react with hybrid perovskite,” explains Zhao. “Furthermore, the CHI would not only passivate the defects but also modify the band alignment in the device.” The net result was perovskite solar cells with highly reproducible and stable efficiencies reaching 18.4% at 45 ± 5°C under ambient conditions.

Commenting on the work, Martin Green – Scientia Professor at the University of New South Wales, Sydney, and Director of the Australian Centre for Advanced Photovoltaics, who was not involved in these latest developments but has over 40 years’ experience in solar cell research – says, “the paper does, as the authors state, report a perovskite device that is 'one of the most stable reported.'” However, he added that the figures Huang and colleagues cite correspond to about 8 months illumination in the field, suggesting more than 4% degradation per year from light exposure alone.

Green highlights the specifications of present module warranties, which are generally less than 2-3% degradation in the first year, then less than (0.5-0.7)% per year in the 25-30 subsequent years, for degradation from all causes, and adds “Even this device, one of the best perovskite results so far reported, falls far below the stability expected from a commercial product, when tested in isolation under just one of the stresses cells will see in the field. These perovskites are expected to be much more sensitive than silicon to all the other stresses.”

As for the CHI-passivated inorganic perovskite solar cells, the efficiency improvements are impressive, and the technique points towards progress on the stability front too. However, while the devices maintained 95% power conversion efficiency over 240 hours continuous illumination, this falls still further behind the rates of degradation that commercial solar cell providers can afford than the oxysalt encapsulated cells.

Zhao also comments on possible issues around the lead content found in both the solar cells reported. “The toxicity of lead would be an issue for large-scale application but It can be solved by some control just like the lead acid battery. Of course, we should also try to develop some low-lead or even lead-free perovskite for photovoltaics in future.”

Despite the achievements their reports proclaim, the researchers behind both papers are quick to highlight the outstanding challenges. Zhao suggests that future work will push to increase efficiencies of their inorganic perovskite solar cells further still. As for Huang, he points to a clear need for further enhancing the stability of their cells without compromising the efficiency, adding. “More importantly, we need to transfer the lab-scale process to an industrial-scale manufacturing process.”

Find out how much you can save on going solar at home today with the HahaSmart Price Checker.

Design the perfect solar array for your roof with the DIY Design Tool.