Florida Power & Light Co. applied to have almost one acre of wetlands filled as part of plans for a $100 million solar power plant at Kennedy Space Center that would power 15,000 homes. Experts say the plant will have minimal environmental impact, and create habitats for wildlife. 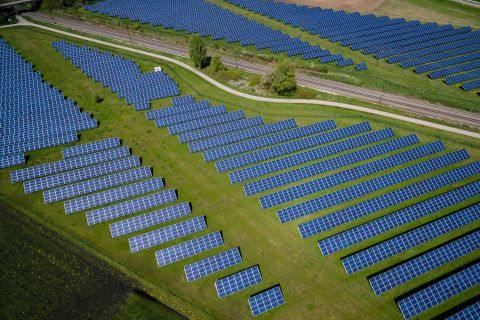 Florida Power & Light Co. has applied for a federal permit to fill in almost an acre of wetlands at Kennedy Space Center, to make way for a new $100 million solar power plant that will generate enough energy to power 15,000 homes, while preventing more than 100,000 tons of annual greenhouse gases.

Construction on the so-called Discovery Solar Energy Center plant includes discharging 1,518 cubic yards of fill over 0.95 acre of wetlands and also would result in impacts to 7.64 acres of other surface waters, according to the public notice of FPL's permit application to the U.S. Army Corps of Engineers.

While there is no specific cost estimate yet, FPL has built similar 74.5-megawatt solar power plants, including one in Barefoot Bay, for in excess of $100 million.

The new plant would go on 504 acres across from the KSC Visitor Complex, and FPL would lease 491 acres from NASA. The site includes a total of more than 40 acres of wetlands.

The area of the proposed KSC plant across from the KSC Visitor Complex has dense stands of Brazilian pepper and sparse cabbage palm, with dead and dying trees throughout. Two small freshwater marshes on the project site have formed in a former citrus grove, likely resulting from irrigation modifications for farming, according to the public notice.

The public has 30 days from issuance of the July 30 public notice to submit comments to the Corps of Engineers about the permit.

The project is still in the early stages of development, so FPL officials could not say when the plant will begin construction or enter in to service.

"We’ve partnered with several environmental organizations throughout the state, such as Audubon Florida, to help in the design and development of these projects," FPL spokesman Stephen Heiman said via email. "We design our projects in a way that minimizes environmental impacts."

No two FPL solar plants are laid out the same, Heiman added.

"They’re built around environmentally sensitive areas, such as wetlands," Heiman said, "and we’ve even enhanced areas around our solar plants to create habitat for the diverse ecosystems that coexist within our facilities (i.e. bat boxes and pollinators).

To offset "unavoidable functional loss to the aquatic environment" from the project, FPL proposes to buy federal mitigation bank credits from the Neoverde Mitigation Bank in Volusia County.

The project will add to the 18 other solar plants FPL operates, including FPL Barefoot Bay Solar Energy Center, completed last year. That plant, which is also 74.5 megawatts, cost $116 million.

The U.S. Fish and Wildlife Service issued a opinion in December 2018 that concludes the project "is not likely to jeopardize the continued existence of the eastern indigo snake or the Florida scrub jay and will not result in destruction or adverse modification of designated critical habitat," for those two threatened species, according to state permitting documents.

FPL has stepped up its solar efforts in recent years at the Space Center.

The company operates the FPL Space Coast Next Generation Solar Energy Center at KSC. That 10-megawatt solar plant, built in 2010, feeds FPL's electric grid, generating energy for more than 1,000 homes, according to a NASA news release issued when the plant was completed.

FPL also built a separate 1-megawatt solar power facility at Kennedy Space Center as part of a public-private partnership between NASA and FPL, supplying the space center with electricity since late 2009.

In 2017, the company touted its Barefoot Bay Solar Energy Center as one of eight new 74.5-megawatt solar plants to begin serving customers by early 2018, saving customers $39 million in fuel and other savings. Each plant generates enough electricity to power about 15,000 homes, preventing an estimated 118,000 metric tons of yearly carbon emissions — the equivalent of removing 12,600 passenger vehicles from the road each year, the company said.

At the time, FPL said its customers would pay for the $900 million cost of the eight plants after they went into service.

"We’re building these solar plants at no net-cost to our customers," Heiman added. "Each plant will generate millions of dollars in savings over their lifetime that will not only offset the initial investment of the project, but provide additional savings above and beyond that upfront investment."

See how much solar could save you at home with the HahaSmart Price Checker.