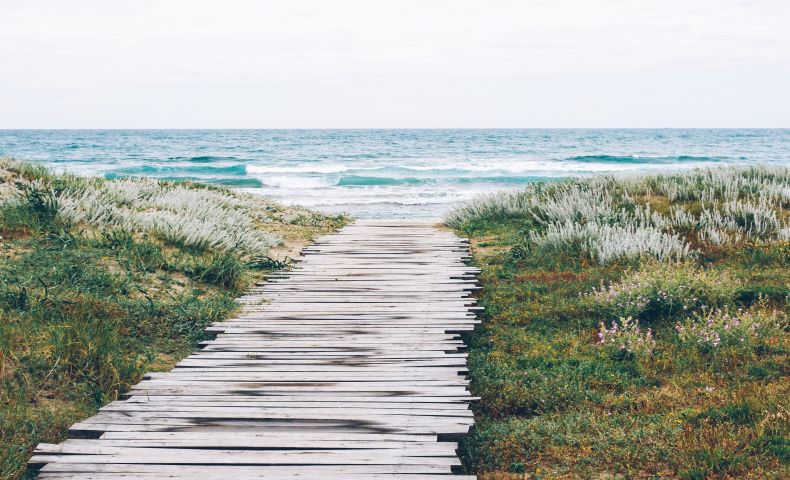 Floating solar panels with photovoltaic cells could be headed out to sea amid growing interest in offshore solar panels.

In June, meanwhile, Dubai Electricity and Water Authority issued a request for proposals from consultants willing to study, develop and construct floating solar power plants in the Arabian Gulf.

The announcements followed the news last year that Oceans of Energy, a Dutch company, had formed a consortium to design, build and operate the world’s first offshore floating solar farm. The project, off the coast of Scheveningen, the Netherlands, will be in operation before next year, according to the Oceans of Energy website.

Whether it will really be the first offshore floating solar power plant is open to debate. Singapore-based Sunseap Group is due to have a 5-megawatt plant on the water along the Strait of Johor, Singapore later this year, the Singapore Times reported in May.

And Swimsol, which claims to be the leading solar energy company in the Maldives, has been installing small-scale versions of its SolarSea floating platforms since 2014. By the end of this year, the company may have installed more than 500 kilowatts of capacity of solar panels, based on information on Swimsol’s website.

Elsewhere, the 70-megawatt Kagoshima Nanatsujima Mega Solar Power Plant in Japan, once the country’s biggest solar panels with photovoltaic cells project, comes close to qualifying as a pioneering offshore development as it was built in 2013 on reclaimed land in Kagoshima Bay, on Kyushu island.

Molly Cox, a research associate at Wood Mackenzie Power & Renewables, said offshore floating solar panels “may be the next frontier” as the space available for inland projects tightens in some solar power markets.

“The key drivers of the floating solar industry may be the lack of available land for ground-mounted arrays, high land costs and aggressive national or citywide renewable energy and greenhouse gas emissions targets,” she said.

“These factors will help propel the floating solar energy market forward, for both inland and offshore applications.”

For now, she said, developers are still gaining experience in floating solar power plants located on inland bodies of water, such as lakes and reservoirs. World Bank figures from September 2018 put the total amount of inland floating solar panels with photovoltaic cells at 1.1 gigawatts.

But the World Bank said this could ultimately grow to 400 gigawatts, or roughly the total capacity of solar panels with photovoltaic cells installed worldwide at the end of 2017. And this is before venturing out into the ocean.

Given this vast potential, it perhaps seems odd that developers are rushing to build solar plants in the sea, where waves and saltwater add significantly to installation, operations and maintenance challenges. However, places that do not have much land for PV development may also lack lakes or reservoirs that they can use instead.

“In places like Japan and Dubai, you do have land constraints,” observed Jenny Chase, head of solar analysis at Bloomberg New Energy Finance.

Furthermore, offshore solar proponents claim the marine environment can help boost production by keeping solar panels cool. Oceans of Energy said it expects offshore power yields to be around 15 percent higher than those of comparable onshore projects. And Swimsol claims a 5 percent to 10 percent uplift in production compared to rooftop-mounted solar panels.

Said Cox: “It’s possible that the system performance of offshore floating solar power plants will yield stronger results compared to inland floating solar energy projects, but it is unclear by how much.”

The capital cost of an inland floating array is typically between 10 percent and 15 percent higher than for ground-mounted solar panels, she said, and “total costs for offshore floating solar panels will likely be much higher than that of inland applications.”

As a result, it is still far from clear whether offshore solar panels will sink or swim. “Along with higher costs, the reliability and risk of offshore solar is not completely clear,” Cox said.

If you’re interested in going solar, see how much you can save by using the HaHaSmart price checker tool and then you design your own solar system with the design DIY tool.