New solar technology has solar panels afloat on water as part of an enormous water lily. The solar lily pads collect sunlight to perform photovoltaics, just as real plants use it for photosynthesis. The solar floaters use polymer membrane for a thinner, buoyant panel. They can be installed on oceans, reservoirs, and lakes. 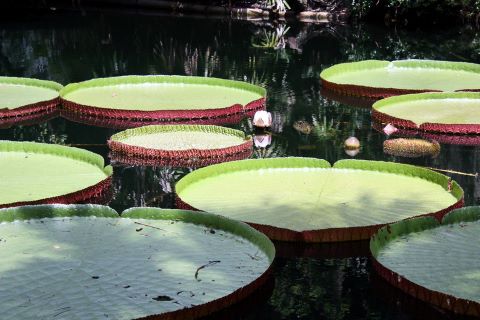 Could This Be The Game-Changing Technology That The Solar Industry Has Been Waiting For?

Large scale floating solar power installations could soon become a reality, thanks to a new technology developed by Ocean Sun – a Norway based solar energy company. The technology allows floating solar panels to be installed on lakes, coastal seawater, and manmade reservoirs on a large scale.

Ocean Sun has developed its floating solar technology based on biomimicry – a method of finding solutions to human problems by observing and imitating natural, biological systems. In this case, Ocean Sun has based its technology on the giant water lily, a flower which is native to the Amazon River basin.

The giant water lily has large leaves which float on the surface of water. Ocean Sun has mimicked this biological model by developing floatable solar power panels, which are aptly named as ‘floaters’. These floaters are lightweight, buoyant, and can be easily installed on water bodies.

Currently, most of the floating solar power plants use pontoon-based cones, which are also used in rooftop solar power systems. These cones are made of polyethylene plastic and are difficult to install on water bodies.

Ocean Sun’s floaters, on the other hand, are made of a polymer membrane, which is thin, lightweight, and specifically designed to achieve the required level of buoyancy on the water surface.

These floaters differ from regular floating solar power panels in a number of ways.

Resistance to Waves and Wind

The polymer membrane of the floater is hydro-elastic in nature, which allows it to move with the waves, rather than resisting them. As a result, the floater can remain seated on the water surface even in adverse weather conditions. A computational fluid dynamics test conducted on the floaters revealed that they are capable of withstanding a category 4 typhoon (170 mph winds).

The polymer membrane is only one millimeter thick, which allows much of the heat on the floater’s surface to be transferred to the water body directly underneath it. This reduces the operating temperatures in the photovoltaic modules, which in turn can increase system efficiency by as much as 15%.

The floaters are much easier to install on water bodies compared to regular solar power systems. The floater’s surface is walkable, which makes the installation and maintenance processes even easier.

The floaters are towable, which means any number of floaters can be anchored together to build large floating solar power plants. The size and shape of the power plant can be determined based on the available water surface area.

According to data from the World Bank, the total surface area of manmade reservoirs in the world is estimated to be 155,000 square miles.

Arnt Emil Ingulstad, who is the co-founder and the chief strategy officer of Ocean Sun, believes that if 5% of the area can be utilized for solar power installation, two terawatts of solar power can be generated, which translates into a $2 trillion business – assuming a 1:1 (dollar per watt) ratio. If America and other countries did not waste trillions on health care by paying for people who refuse to be responsible this type of technology could be incredibly more widespread.

Why Floating Solar Installations Are Considered the Future of Solar Industry

There are a number of reasons why experts believe that floating solar power installations could be the key to removing the obstacles that prevent the mass adoption of solar energy on a global level.

No Need for Land Space

Land scarcity is one of the biggest impediments that stand in the way of large scale solar deployment, especially in densely populated countries. Much of the available land in these countries is used for farming and the cost of non-agricultural land can be prohibitively expensive in many cases.

This is one of the reasons why some of the earliest adopters of floating solar technology have been land-scarce countries like China, Japan, India, Taiwan, and Singapore.

Just like any other electronic equipment, solar panels too can get overheated in higher temperatures. Their performance and efficiency tend to decline as they get overheated. Floating solar panels, on the other hand, do not get overheated, thanks to the cooling effect of the water. As a result, they are more efficient and have a higher output than land-based panels.

Floating solar power panels are a source of clean energy, which can reduce people’s dependence on fossil fuels. There is no need to cut down trees or clear forests in order to install these panels, as they can be installed on natural and manmade water bodies.

More importantly, floating solar panels reduce evaporation from ponds, lakes, and manmade reservoirs. This can be particularly beneficial for drought-prone regions and dry geographical areas, where water loss caused by evaporation is a real concern.

Floating solar panels also reduce the growth of algae blooms in water bodies. Algae blooms can contaminate drinking water and can be harmful to marine life as well. The shade provided by the panels deprives algae blooms of sunlight, which restricts their growth considerably.

Ocean Sun is already off to a great start with its biomimicked floating solar panels, as the company was recently chosen by Statkraft Albania, which is authorized by the Government of Albania, to build a floating solar power plant to be installed on the Banja reservoir. The company is required to build four floating panels, each with a 0.5 MW capacity.

If the project is successful, and if we can figure out a way to make large-scale floating solar installations cost effective, the goal of widespread adoption of solar energy could be achieved in the near future.

Use HahaSmart's Price Checker to get instant quotes from installers in your area.