5,000 Solar Panels Will be Installed For The Catholic Church

The Catholic church is helping a five-acre plot in Washington D.C. install 5,000 solar panels, making it the largest installation of mass solar that the nation’s capital has ever seen. Catholic Energies is a nonprofit organization that helps churches switch over to solar energy. The Catholic Church won’t pay a dime for the installation of the solar panels. 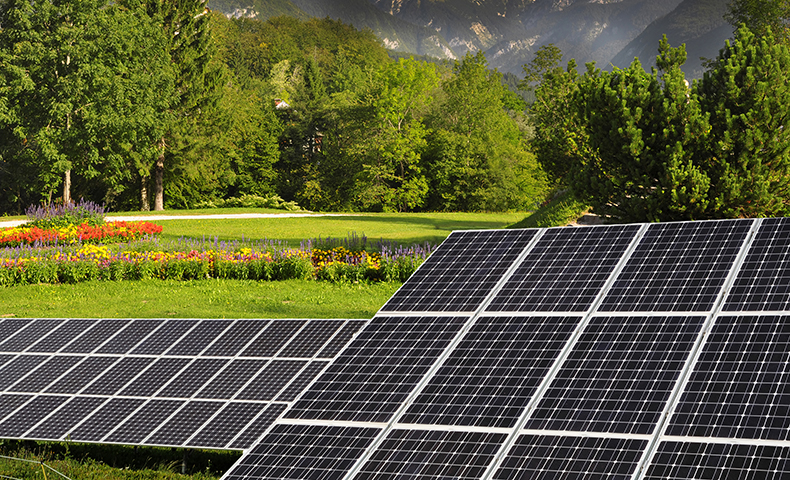 5,000 Solar Panels Will be Installed For The Catholic Church

But by next year, the five-acre plot in Northeast Washington will sprout about 5,000 solar panels, the largest ground array the nation’s capital has seen — a change wrought by local Catholic groups.

Catholic Energies, a nonprofit organization that helps churches across the country switch to solar energy, partnered with the field’s owner, Catholic Charities of the Archdiocese of Washington, to build a solar-powered system sufficient to keep the lights on in 260 homes for one year. The power produced will go back into the D.C. grid, earning Catholic Charities enough energy credits to offset the electricity costs of 12 of its properties across the District.

“I’m just really excited that we’ve been able to do something that I really believe is the right thing to do for the planet,” said Mary Jane Morrow, the chief financial officer of Catholic Charities, a faith-based social services agency.

It is the second energy-saving project Catholic Energies has undertaken in the region to date. The group finished an installation of 440 solar panels on the roof of a Virginia church last month.

The solar panels, slated for completion in early 2020, will cost several million dollars, according to Page Gravely, the executive vice president for client services at Catholic Energies. But Catholic Charities will not pay a cent.

That’s how Catholic Energies works. It negotiates a deal between its client — typically a Catholic church or high school — and an investor, most often a sources of renewable energy company. The investor agrees to pay a third-party contractor to install a solar system in return for a 30 percent federal tax credit, as well as financial incentives that vary by state.

Catholic Energies then takes a small (less than the industry standard of 15 percent) developer’s fee, enough to fund its five-person operation based in the District on a break-even basis. The group accepts a low rate because it wants to fund “as many projects as possible,” said Dan Last, the chief operating officer of Catholic Energies.

Washington is particularly friendly to solar: Its solar credits, worth about $400 each, make it “the hottest solar market” in the United States, Last said. Massachusetts offers the next-highest price at about $300 a credit.

That’s a boon for IGS Solar, the energy company funding the installation in Northeast Washington. And Catholic Charities also stands to gain. The solar-powered system will save the agency several hundred thousand dollars per year, according to Last.

But the fiscal benefits are not the entire point, Morrow said. She cited “Laudato Si,” a 192-page paper Pope Francis released in 2015 that argues for a partnership between science and religion to combat human-caused climate change.

In the document, whose title translates to “Be Praised,” Francis demanded an “ecological conversion” for faithful Catholics, exhorting them to embrace recycling, tree planting and carpooling.

“We love being supportive of the pope’s position and believe that it really has helped advance the conversation within the Catholic community about our responsibility to be good stewards of this earth,” Morrow said.

Vladimir Bulovic, a professor of electrical engineering at the Massachusetts Institute of Technology who researches solar technology, said the work Catholic Energies is doing is vital and advances environmental goals. Using publicly available government data, Bulovic estimated that the production of the D.C. solar field will be equivalent to 2.5 percent — about one-fortieth — of all sources of renewable energy currently generated in the District each year. That’s “a significant addition,” he said.

“It’s important to be inspired about generating renewable energy capacity for the planet,” Bulovic said of Catholic Energies.

Apart from their faith-driven funding, the solar panels are unusual in another way. They will sit atop a “pollinator meadow” of 650,000 nectar-bearing, flowering plants including black-eyed Susans, orange coneflowers and milkweed. The meadow is meant to reinvigorate local bee and butterfly populations, Last said.

It will also become part of ongoing research, conducted by the National Renewable Energy Laboratory, into whether placing pollinator-friendly plants beneath solar panels increases their output and lifetime, said Rob Davis, the director of the Center for Pollinators in Energy, who consulted on the project. A University of Arizona study accepted for publication later this summer recently found that tomato plants can cool the area under solar panels, leading to augmented energy production, according to Davis.

This “is a promising emerging trend in solar design and development,” Davis said.

The plants were also a concession to locals, some of whom complained that solar panels would be too ugly — typically, they are built atop gravel or dirt. The field is adjacent to a large neighborhood where not all residents are fans of the project.

The “majority” of people living near the field are concerned about the solar panels for several reasons, said Joyce Chandler, 57, a retired engineer who has lived in the neighborhood for 30 years. She and her neighbors disliked the fact that the project required felling about 40 trees, which they worry may increase storm water runoff into private yards.

And Chandler was especially upset by the recent use of an herbicide on weeds ahead of the installation.

“They are impacting what has been a very residential area,” Chandler said. “People walk out with their little children, their dogs and they had no idea they were spraying these chemicals out there.”

Last said Catholic Energies has worked to address residents’ concerns, pointing in part to a study it commissioned that showed the solar panels would not negatively affect the health of those living nearby. He said the weedkiller used is permitted by the D.C. Department of Consumer and Regulatory Affairs, that Catholic Energies followed all of the city’s herbicide protocols, and that the group is planting nearly 100 trees in the field as part of the solar project.

Catholic Energies formed just three years ago — inspired, in part, by the pope’s 2015 paper. The group is a sub-program of the nonprofit Catholic Climate Covenant, a national initiative launched in 2006 that seeks to educate and engage U.S. Catholics in caring for the environment.

Dan Misleh, the founder and executive director of Catholic Climate Covenant, said Francis’s arguments were a “driving force” behind Catholic Energies, which he said compels churches to think about the environment by showing them how much money they can save through “smart” energy.

Often, though, the churches reach out first. Most clients get in touch by filling out an online interest form on the Catholic Energies website, Last said. After that, Catholic Energies conducts a free feasibility study and comes up with a possible design. Its goal is always to create at least 10 percent savings for Catholic institutions.

If everything works out, Catholic Energies locates a third-party investor, lets the church choose among several solar contractors, and construction begins. The group received about 40 requests nationwide last year and accepted as many as possible, Last said. He said dealbreakers are usually things such as an unsuitable location — crowded, “un-sunny” Midtown Manhattan, for example.

Misleh said Catholic Energies is not alone in heeding Francis’s call. He pointed to dioceses around the country, including in Atlanta and San Diego, that are working to switch their parishes and schools to solar power. But Catholic Energies is the only program he knows of that allows Catholic institutions to do so free of charge, he said.

The idea is catching on. The organization has about 25 projects in the pipeline, in eight states, representing between $12 million and $15 million in construction, Last said.

A major milestone came in mid-June, when the Immaculate Conception Catholic Church in Hampton, Va., became the first church to finish a project with Catholic Energies. Its new $350,000 solar system, funded by investor Red Lion Renewables, will meet 100 percent of the parish’s electricity needs, saving it 14 percent on its monthly electricity bill. It will also prevent the release of about 230 tons of carbon dioxide per year, equivalent to emissions from 25 homes.

John Grace, the church’s pastor, said he has received 15 calls from churches around the country asking how he did it — and if they can, too — in the weeks since the installation. He has also seen increased interest in the church from young people, who say they are impressed by Immaculate Conception’s concern for the environment.

Misleh said the roots of projects like the one at Immaculate Conception are biblical.

“It goes back to Genesis. We are supposed to be caretakers of God’s gift of creation,” he said.

Want to go Solar? See how much you can save before the installer comes out by using the hahaSmart price checker tool.