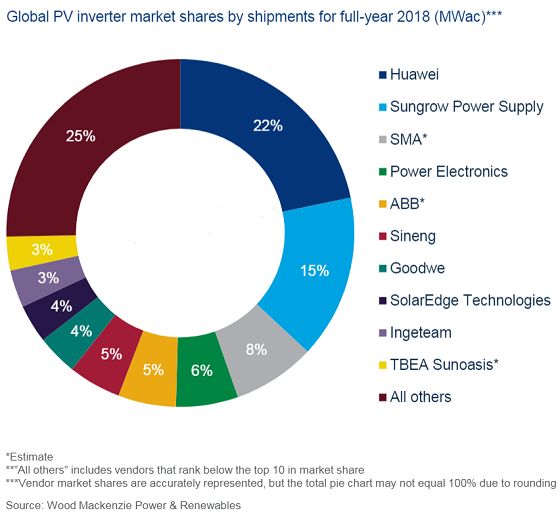 Chinese giant Huawei is still the top company in shipping solar inverters around the world in 2018, followed by Sungrow and SMA. Overall shipments of solar inverters grew 8% last year.

Despite losing 4 percentage points of market share in 2018, Chinese giant Huawei is still the top company in shipping solar inverters around the world last year.
Sungrow and SMA came in second and third place, respectively, in this niche of the solar industry, according to a report by analyst Wood Mackenzie Power & Renewables. The tria have remained in those positions since 2016.

Asia-Pacific was again the largest inverter market in 2018, accounting for 64% of global shipments, the report showed. The U.S. and Canada had 21%  growth while Latin America, the Middle East/Africa and Turkey (MEA) saw an increase of 40%; Europe saw a 50% upswing.

Overall shipments of solar inverters grew 8% last year, with Huawei on top of the list. The company’s products are are used in more than 170 countries, serving over one-third of the world's population.

Analysts say the dip in market share suffered by Huawei has to do with the decision by China to reduce public solar subsidies, something that also affected the company’s domestic rivals.

The report also notes the top five inverter makers - which include Power Electronics and ABB in fourth and fifth place, respectively - saw their combined market share fall 6% last year (62% in 2017 to 56% in 2018) for the first time in six years.

This allowed vendors in the No. 6- No. 10 positions to make gains, increasing their combined share of the global market from 15 percent to 19 percent, according to the study. Israel’s SolarEdge and Spain’s Ingeteam broke into the top 10 for the first time

Several markets where the top five inverter vendors lost market share in 2018 were also the year’s highest-growth markets. This was the case for the European, Latin American and MEA markets.

The analysis by Wood Mackenzie indicates some companies are now looking to differentiate on residential and commercial offerings, and some may opt to exit utility-scale PV entirely, as Schneider Electric did several months ago.

Wood Mackenzie expects that exits, mergers and acquisitions may cause the market to consolidate in 2019.

The report revealed that Israel’s SolarEdge and Spain’s Ingeteam broke into the top 10 for the first time, in eighth and ninth places, with Power Electronics and ABB becoming the fourth and fifth largest manufacturers, respectively. Sixth and seventh places were occupied by Sineng and Godwee and another Chinese company, TBEA Sunoasis, completed the top ten.