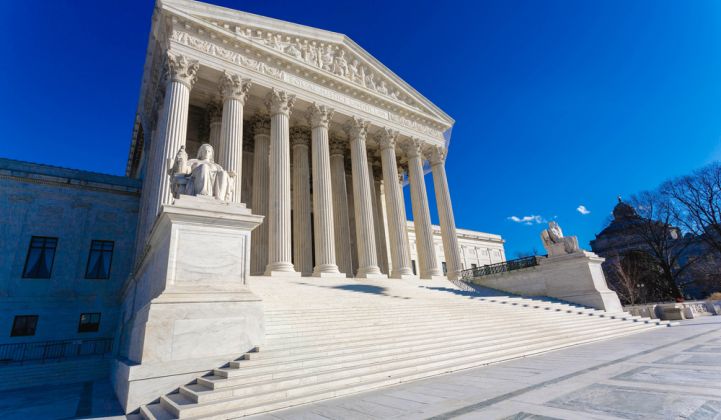 The case garnered national attention for its unusual approach to fighting the rise of demand charges, fixed charges and other costs for solar-equipped customers via antitrust law, and its potential implications for ratemaking policy across the country. But before that case can go forward, the U.S. Supreme Court has to decide a separate legal issue -- whether SRP is or isn’t immune from antitrust law as a publicly owned utility.

A U.S. District Court judge in Arizona and the 9th U.S. Circuit Court of Appeals ruled that it isn’t. But Salt River appealed to the high court in September, setting up the legal showdown to come during oral arguments set for March 19th.

This week, a host of groups filed amicus briefs, outlining the complicated issues that could determine whether SolarCity’s original challenge will or won’t see it’s day in court.

“There are a ton of different battles in this one Supreme Court case,” said Jean Su, associate conservation director for the Center for Biological Diversity and the author of its amicus brief in the case. “On the one hand, you have consumers and environmentalists going against utilities -- and you also have solar versus fossil fuels.”

This argument is summed up in her organization’s filing, which cited “both ever-increasing greenhouse gas concentrations -- currently at more than 400 parts-per-million -- and the negative impacts of fossil fuel extraction and combustion on public health, wildlife, and the environment,” as justification for allowing SolarCity’s case to go forward.

“But you also have small business versus big business -- a bunch of small businesses came out saying they don’t want to be bullied,” she said, referring to a brief from the National Federation of Independent Business, stating that a decision against SolarCity could limit its members from seeking antitrust claims against quasi-public market participants in the future.

“And then you have states versus feds,” she said. While the U.S. Department of Justice filed an amicus brief supporting the use of antitrust law, groups representing state and local governments filed a brief stating their concern that a decision removing SRP’s immunity could open them up to antitrust lawsuits as well, and expose them to “enormous costs and risks.”

SRP has claimed that it’s protected against lawsuits like SolarCity’s under the “state-action immunity” doctrine, which holds that because it’s given its authority to set prices by the state, it’s not subject to federal antitrust law. But according to Su and the other environmental groups filing briefs before the court, SRP’s unusual structure ought to exempt it from this immunity.

“SRP’s voting structure is only available to people who own real estate in that jurisdiction,” she said, with larger landholders receiving more voting power. That might have made sense in 1903, when it was founded as an irrigation and hydropower project. But SRP’s service territory now hosts some of the most highly populated parts of the state, including the Phoenix suburbs of Scottsdale, Mesa and Tempe and much of the rest of Maricopa County.

That urban population is increasingly shut out of decision-making at the utility, Su said. For example, “if you rent, you’re not eligible. That eliminates 30 percent of all ratepayers, on average.”

The Supreme Court has in fact ruled in the 1981 case of Ball v. James that SRP is “more a for-profit entity than a public entity,” she said. But whether public entities similar to SRP are subject to this kind of immunity have a murkier legal history, she said, with three U.S. Circuit Court decisions against and two for it -- a situation known as a “circuit split,” which justifies a Supreme Court review.

The Supreme Court is expected to issue a decision this summer. Su and her cohorts hope to see it uphold the 9th Circuit decisions, and send Salt River back to District Court to face SolarCity’s antitrust claims. There, it will face questions about whether its demand charge regime is an illegal use of its monopoly power to stifle private-sector competition from rooftop solar -- a complicated legal issue that’s based both on intent and real-world effects of its policy, she said.

"The scariest option is that public power entities like SRP can totally use state action immunity and be exempt from antitrust law," via a Supreme Court decision that upholds its claim directly, said Su.

Demand charges: The premise and the pitfalls

There’s no doubt that SRP’s demand charges have had a real-world effect. SolarCity reported a 96-percent drop in sales after the plan was introduced. And GTM Research data shows that solar installations in SRP territory “cratered” in the second half of 2015, as GTM Research solar analyst Cory Honeyman put it, and have remained a shadow of their former selves since then. 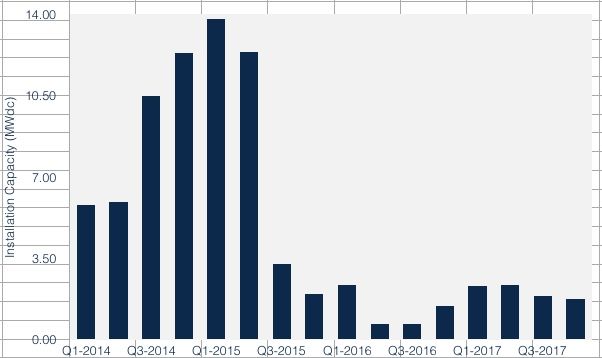 “Even with some companies saying that they can still make solar work in the territory, with things like storage or other demand-management strategies, the market in SRP still is not close to the capacity it was prior to the demand charges,” GTM Research solar analyst Allison Mond said.

In the meantime, SRP has issued an RFP for 100 megawatts of renewables, with a minimum project size of 25 megawatts. It’s also tapped into the falling cost of batteries for grid-scale energy storage, with a 20-year power-purchase agreement for 20 megawatts of lithium-ion batteries alongside the same amount of new solar PV.

SRP’s demand charges are an extreme example of a rising trend. Utilities have proposed demand charges in states including Arizona, California, Massachusetts, Oklahoma, Texas, Ohio and North Carolina, with varying degrees of success.

In Arizona, investor-owned utility Arizona Public Service tried to bring mandatory demand rates to all residential and small-commercial customers, but was fought back by consumer and solar advocates, and ultimately agreed to a settlement that made the rate purely optional. In January, Massachusetts utility Eversource received regulatory approval for a mandatory demand charge for residential solar customers, and has since been challenged in court.

All of these new rates are meant to serve the higher cause of balancing the costs and benefits of customer-owned solar between those that have it and those that don’t. Demand charges, in their various forms, are commonly based on a customer’s peak usage -- the moment they’re putting their maximum share of stress on the grid -- as a way to more accurately link prices to costs.

“Demand charges are intended to more equitably compensate for grid usage, since infrastructure is built for capacity,” MJ Shiao, GTM Research head of Americas. But he cautioned that SRP’s example shows that, “if they're not carefully considered or calculated, demand charges can have a strongly negative impact on local distributed generation.”