How Home Solar Ties to The Grid

How Does Home Solar Tie to The Grid?

What is a Grid-Tied Solar-Powered System?

A grid-tied solar-powered system, also called a utility inter-tie photovoltaics, uses solar panels, a solar power inverter, and other components to turn the sun’s solar energy into solar electricity for your homes use, while your home remains hooked up to the local utility. This is going to be different from an off-grid solar-powered system or a stand-alone solar panel installation, where your structure isn’t hooked up to utility power.

Why Get a Grid-Tied Solar Panel Installation?

In addition to what you will be saving on your electric bill when you have a grid-tied solar-powered system raises the value of your property. Solar panel installations also make a home more attractive to prospective buyers, particularly when compared to an otherwise identical home. This can make a huge difference if you decide to sell your homes in a tight real estate market.

Another great solar incentive is going to be that the Federal government, and many states and local utilities, offer rebates, tax credits, low-interest loans and other solar incentives for adding solar power.

Of course, solar energy is a clean source of power. It reduces dependence on fossil fuels practically and effectively and helps protect our environment.

Fire Mountain Solar never recommends that a customer who is already hooked up to utility power disconnect and go off-grid. There are a few reasons, but some key ones are:

- Off-grid solar-powered systems have some unique design limitations, which means most people will need to adjust their power use habits and may need to replace some appliances.

- Grid-tied solar-powered systems offer you the best of both worlds. You can have your solar-powered system sized so that your 12-month average electrical bill is next to nothing, but still have the flexibility to at any time draw more than your solar panel installation is producing without having to do anything.

- Adding solar power batteries to a grid-tied solar-powered system will give you the best of all worlds as far as solar-powered systems go. You are going to have the convenience of utility power plus you solar-powered is going to automatically switch to the stored battery power if the grid goes down, providing convenient, quiet power to keep your essential household or business loads operating. 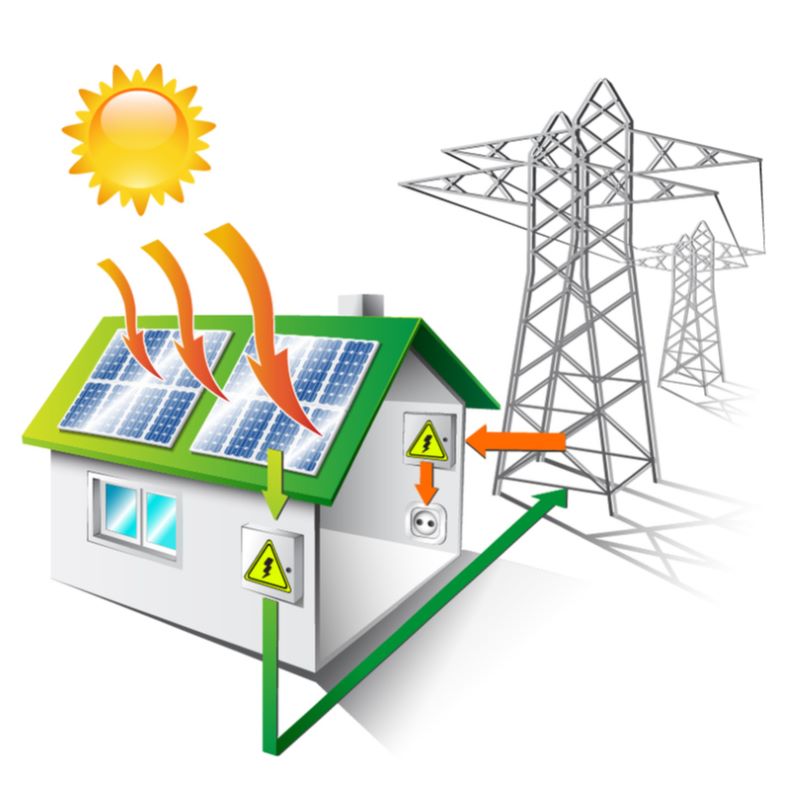 How Does a Grid-Tied Solar-Powered System Work?

This back and forth process is called “net metering”, meaning that you are only billed for the “net” electricity that is purchased over the entire billing period. At the end of each billing cycle, your meter will not have spun as fat forward when compared to not having solar electricity, saving you money. If you produce more than you use during a billing period, your utility company is going to retain it as a credit, which is going to be applied to future electric bills.