We may not be flying hovercars George Jetson-style yet, but futuristic advancements in transportation are on their way, especially in the world of solar power.

With solar panels powering more and more homes in the US and across the world, it’s only a matter of time before solar powers everything, right?

Some of the inventions out there may seem like science fiction, but rest assured, the technology is real, and with a bit more time, we may soon see roads, waters, and skies filled with vehicles powered by nothing but sunlight.

Here are some of the prototypes for solar-powered vehicles already being tested. 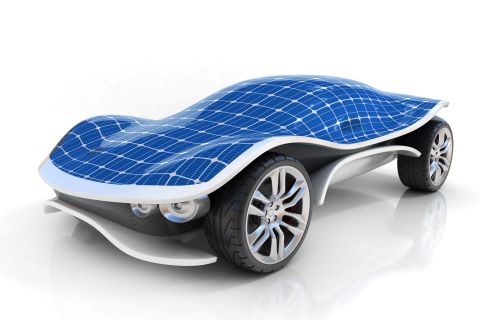 The race for the first solar car is on, with several auto companies already test driving solar panel powered vehicles. So far, solar panels haven’t taken cars very far, but a new model called the Lightyear One hopes to change that, driving almost 500 miles on a single charge.

This car still depends primarily on a plug-in charger to run, with its 54 square feet of solar panels on the roof and hood adding about 7.5 miles each hour to the vehicle’s range. With ideal conditions, the sun could boost the car’s range by 12,000 miles per year. Not too shabby.

This all-electric luxury car is set to go into production in 2021, and will cost a whopping $170k. So while the technology is cool, it’s unlikely that we’ll see many of these on the road for some time to come.

Unlike solar cars, solar trains may soon be a reality for more than just the filthy rich.

On December 16th, 2017, the world’s first fully solar-powered train left the station in New South Wales, Australia, using solar panels on its roof and stops to power its journey.

While the Byron Bay solar train doesn’t go very far - only 1.9 miles - it is completely powered by clean energy, completing one round-trip journey each hour. This technology has big implications for expansion of solar energy in train stations.

Unlike cars, trains have much more potential for solar success. Pennsylvania just adopted solar-powered train signals to prevent delays from power outages; and a train station in Aldershot, England installed a solar farm to power a railway station. If these pilot programs are successful, in a few years, you may be able to ride a solar powered train as part of your daily commute.

A new solar yacht called the Silent 55 is completely charged by solar energy. Silent Yachts, a solar panel boat company in Austria, has built this technological marvel, which has unlimited range, no noise, zero fumes, and requires no maintenance.

However, unless you board and win it in a pirate ship battle (which we don’t recommend), this boat will cost you a pretty penny, at one and a half million dollars. Yikes!

For those of us who don’t have millions of dollars lying around, you can still take a boat ride on solar power, with a solar ferry.

In southern India, inland of the port of Kochi, the Aditya solar ferry takes passengers back and forth across between towns across a lake, about 2.5km. Making 22 trips per day at about 15 minutes each, the ferry only costs about $2.60 per day to run, with an average of $65,000 USD in savings annually.

While not yet applied to commercial operations, solar-powered airplanes have been breaking world records for longest flights.

In 2003, Bertrand Piccard, the psychiatrist and explorer who flew around the world in a hot air balloon in 1999, decided there had to be a better way to fly without worrying about his fuel running out. And so, the Solar Impulse was born. After much experimenting, in 2015 Solar Impulse 2 took off on an ambitious flight around the world. With a huge wingspan and over 17,000 solar cells, with lithium batteries for storage, Piccard and his partner, Andre Borshberg, traded off piloting the plane for 14 months and over 550 hours in the air, traveling 25,000 miles, all without a single drop of fuel.

In 2018, an unmanned solar-powered aircraft from Airbus broke a record for the longest duration flight ever made, flying for 26 days straight on solar power.

With gas prices rising each year, road trips are becoming less attractive. But what if you could power your trip with solar?

A new solar RV from Dethleffs could allow you to trek in style. Decked head-to-toe in solar panels, the zero-emissions, all-electric motor “e.home” is filled with smart tech and utilizes 334 square feet of thin-film solar panels that can generate up to 3,000 watts of electricity.

Like many other solar transportation methods, this is still in the concept stage, and will come with a hefty price tag, once it does hit the market.

Can’t afford a solar car? Why not take the bus?

Most of today’s solar buses are, in fact, hybrid solar buses, which use a combination of solar power and electric charge to get around.

The world’s first solar bus was introduced in 2007 in Adelaide, Australia, as part of an initiative to reduce carbon emissions. Since 30% of the city’s emissions came from transportation, making an electrified, green bus seemed like a great idea. The Tindo buses are 100% electric, with zero emissions. While they don’t have solar panels on them, they have batteries that are charged at the central station, which is topped in panels.

In 2016, Uganda adopted a solar bus called the Kayoola, which charges two batteries, one from solar panels on the roof and one from electric charge for longer trips or nighttime journeys.

In 2017, the UK launched a Solar Bus project to cover the roof of The Big Lemon’s bus depot in solar panels to charge its new electric buses.

Which method of transportation would you choose to get around? Vote for your favorite in the comments!

While not yet advanced enough for widespread use, there is great potential for public transportation to be powered by solar panels, either on the vehicles themselves, or at charging stations powered by photovoltaic solar cells.

Until we get there, your best bet is to invest in an electric vehicle, and charge it with the solar panels on your home's roof or solar carport.

Don't have rooftop solar yet?

Design a solar array for your house using the HahaSmart DIY Design Tool.

Then get free quotes with the HahaSmart Price Checker today and start saving.