As climate change makes extreme weather more common, more and more households will need to be concerned with preparing their home for natural disasters. Solar systems can help you weather some of the worst conditions in an emergency.

Solar panels do pretty well in average weather conditions like rain, snow, heat, and wind. A National Renewable Energy Laboratory report showed that of 50,000 solar systems installed between 2009-2013, only 0.1% of them suffered damage.

But how well do solar panels fare when battered by intense forces, like hurricanes, hail, tornados, and earthquakes?

Let’s take a look at what happens when solar panels come up against Mother Earth’s biggest natural disasters. 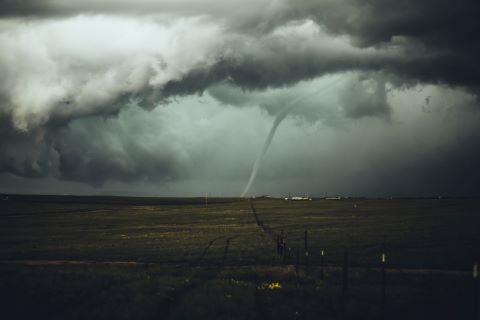 These three go hand-in-hand as they often come as a package deal. Thunderstorms are on the rise as the planet heats up, and with them, we’re seeing an increase in destructive tornados and hail. Will solar panels live through one of these destructive storms?

One downside to solar equipment is that it tends to attract lightning strikes.

While a direct hit is still rare, even a nearby strike can severely damage your solar gear. However, the main threat isn’t to panels themselves, but to inverters and controllers, as PV wiring directs the voltage of the strike there. Solar panels are usually grounded, protecting them from most of the damage.

There are steps you can take to make sure your solar equipment isn’t fried in a lightning storm. Be sure your solar system is equipped with an equipment grounding conductor (ECG), connecting all frames and equipment to the ground. This gives lightning a safe path down. However, in the event of a direct strike, this won’t prevent damage to your equipment - just reduce it.

Lightning protection systems can be installed to safeguard buildings as well. These provide a path for the lightning to go around your building and equipment to be discharged in the ground.

Finally, you can install surge protectors to protect your electronics and appliances.

Even with these measures in place, there’s no guarantee your equipment will escape damage. But at least you will have a better chance.

Can solar panels take a beating from hail stones?

Even the NREL was hit with a massive hail storm in 2017, leaving dents in homes and vehicles, and smashing car windows. Of the 30,000 panels on its building, only a single panel was broken, due to a concentrated hit by several hailstones.

Even if hail doesn’t dent them, a tornado certainly would, you must be thinking.

That said, if you get a direct hit from an EF-5 tornado and your whole house goes up, Wizard of Oz-style, there’s not much to be done.

Ocean temperatures are rising, fueling massive storms like we’ve never seen before. With monster hurricanes increasingly becoming the norm during hurricane season, many cities like New Orleans are looking into solar to help with emergency response.

But how do solar panels handle these hurricane-force winds and rain?

As noted, solar panels are made to withstand strong winds, especially in areas where hurricanes are common. While it’s possible winds could dislodge or damage your panels, or rain could cause water damage, it’s not very likely. In fact, most solar panels systems came out damage-free after Hurricanes Harvey and Irma.

Solar panels can actually perform better in the snow. But what happens when snow completely blankets everything?

Your main concerns will be weight and covered panels. Most panels are rated to bear weights greater than that of snow. So you don’t need to worry much there.

There is concern with snow covering panels - they can’t produce energy without access to sunlight, after all - but you can simply use a snow rake or similar tool to brush the snow off.

This deadly cousin of snow storms can be devastating, causing damage to power lines, knocking down trees, and more. Will ice storms freeze your solar panels to death?

Clear layers of ice have no effect on the rays solar panels receive. Opque ice, you should melt off, as it creates a shadow effect, reducing the efficiency of your panels. But otherwise, you have nothing to fear from ice on your panels.

Your panels are more likely to be damaged from a tree falling on your roof than from the ice itself. So be sure you don’t have any trees threatening your home.

Another big concern in California, wildfires are so common that electric companies are now shutting down power in an attempt to prevent them. With more homeowners turning to solar to keep their power on during Safety Shut Offs, how do solar panels fare when flames are burning?

Smoke and ash can reduce your panels’ efficiency. Smoke cuts solar irradiance (during the Cedar Fire, irradiance fell 1-4%), and ash can land on panels, covering them.

But you’ll still do better than your neighbors without solar when the power is cut. Solar can keep your lights on in emergencies and reduce impact on the grid, helping reduce overall risk of fire.

If worse comes to worse and fire burns your home, solar panels will of course go with it. So hopefully our firefighters will be there to protect us.

A more rare phenomenon, Arizona sometimes sees massive dust storms or haboobs. While beautiful to watch, they can be extremely damaging to solar panel efficiency.

Dust and particle build up is one of the biggest challenges to solar in arid, dusty climates, as well as areas where air pollution is bad, like China. NOMADD states that during and after sand storms, solar panels can see up to 60% energy yield losses.

So if you live in a dusty area, be sure to clean and maintain your solar panels regularly to keep them in tiptop shape.

As far as damage goes? You likely won’t see any physical damage. Just damage to your energy cost savings, which is painful enough. So have a rag ready to clean them off as soon as possible.

California recently experienced some pretty large quakes in Ridgecrest in July, which brings us to our last question: Will solar panels survive “The Big One”?

California is a leader in solar, so this is a big concern for those sitting on the San Andreas fault. But homeowners have little to worry about when it comes to solar panel damage.

Solar panels are fairly light, and made to endure harsh conditions. With proper mounting, the risk of panels falling off the roof is very low. Also, California already has building codes in place since the 80’s to help buildings withstand shaking.

To ensure minimal damage during a quake, be sure that your roof is in good shape before installing panels, as your roof is more likely to cause problems than the panels are.

In the end, the only conditions likely to damage your panels are conditions that would destroy your entire house. So unless you are very, very unlucky, you can rest assured that your panels will rise to the task.

Solar panels for the win!

Solar is great in any weather, so there's nothing to hold you back - check the cost of solar in your area today with the HahaSmart Price Checker.

See how solar panels would look on your roof with the HahaSmart DIY Design Tool.