New research from the Ecological Society of America explores the benefits of agrivoltaics, or the practice of co-developing the same land for both agriculture and photovoltaic solar power.

In plain language: they grew crops under solar panels, with some cool results. 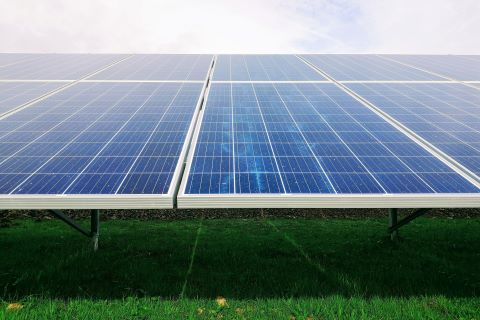 A Win-Win for Crops and Panels

The study found that growing crops in the shade of solar panel installations created a win-win situation both for crops and for solar panels. Here’s how:

Solar panels keep crops cooler in summer and warmer in winter, reducing stress on crops. They also lessen the rate of evaporation of water, so plants can thrive even in areas of drought.

Since they don’t wilt as easily in the midday heat, crops can photosynthesize longer and grow more efficiently. With weather growing more extreme as climate change surges, this will be a big help to farmers.

“Installing” crops beneath solar panels can also help the panels themselves. As water evaporates from crops, it helps cool panels, reducing heat stress and boosting their performance.

The best part: this application of solar technology can be adopted by farmers and solar companies right now, simply by elevating solar panels with a little extra steel.

As University of Arizona professor Greg Barron-Gafford says, “a small change in planning can yield a ton of great benefits!”

While relatively new in America, the idea behind agrivoltaics has been around for a while, and put to good use in other countries.

The concept was first introduced by Adolf Goetzberger and Armin Zastrow in 1981 in a discussion on competition between solar and crop production.

Since then, Japan has led the way in this field, having developed demountable prototypes for combined PV systems and farming in 2004, implementing them on a massive scale, with more than 1,000 open field power plants installed between 2004 and 2017.

In Asia, China built a 0.5 MWp agrivoltaic power plant in 2016, along with several projects since. South Korea is conducting inital tests to use the Japanese model to help reach its goal of 20% renewable energy in 2030. And India is researching projects for isolated sites, to help increase the income of farmers.

In Europe, photovoltaic greenhouses were developed in the early 2000’s, replacing part of the roof with solar panels. Open field agrivoltaic systems were used in Austria and Italy starting in 2007, followed by use in France and Germany. In Italy, 2009 and 2011, systems were used for vineyards. France has used photovoltaic greenhouses since the 2000’s, and has been working on its Sun’Agri program since 2009.

Types of Solar Arrays in Agrivoltaics

There are three main methods used in agrivoltaic research and applications:

1. Solar arrays with space between for crops.

As in the University of Arizona study, with this type of installation, panels are elevated far enough above crops to allow even light distribution below and room for tractors to access crops. Some models, like those used in Japan, are detachable, while others are not. There are also models with tracking systems to adjust the tilt of the panels.

Solar panels are installed on portions of the roof of a greenhouse. So far greenhouse installations have not been terribly successful, often reducing crop output.

Factors that these special solar installations must take into account include:

Some types of crops cannot be used with agrivoltaic systems, as they do not fair well in the shade. But for plants that do enjoy shade, or locations that are overly sunny, co-locating solar panels with them can help them to thrive where they normally wouldn’t.

In the University of Arizona research, farmers grew beans, tomatoes, and peppers, as well as high-value herbs and spices.

Agrivoltaics was found to work especially well with leafy greens like lettuce, chard, basil, and kale. Normally, in high light, plants have smaller leaves as an adaptation for getting too much sunlight, which overwhelms their photosynthesis systems. When located in the shade of solar panels, plants were not overstimulated by too much sunlight, and produced larger leaves in the lower light environment.

It’s clear that farmers and solar can both benefit from this relationship moving forward. And with studies showing that responsible solar panel intallation on public lands can help wildlife too, why not install solar everywhere?

Do you think agrivoltaics are the future of solar in the US? Leave a comment below!

Ready to get solar at home? Check pricing in your area with the HahaSmart Price Checker.

View current Incentives available in your state to see how much you could save with solar.