Solar photovoltaic panels have an average life expectancy of 20-30 years.

With states and nations worldwide pushing for solar, not enough thought is being put into what happens to panels at the end of their life.

While solar panels are an immense help to clean energy initiatives while they are active, they do have a shelf life, and once they expire, solar panels can be a big source of toxic waste, if we aren't careful with how we handle them. 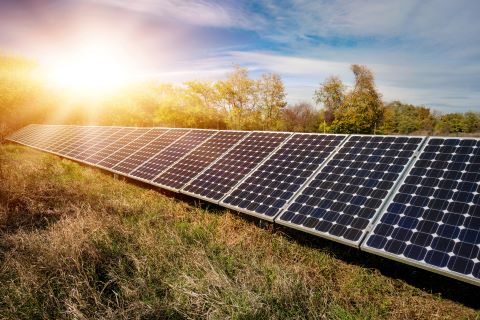 The question is, how to we deal with this waste without harming the environment that solar hopes to save?

A Solar Boom: The Problem of Aging Panels

With the huge boom in solar panel installations in the last few years, we are setting the stage for the solar waste issue to explode in two to three decades, when those aging panels will need to be removed and disposed of.

The issue of aging solar panels is very similar to the issue the US is currently having with supporting the aging baby boomer generation.

In 1946, the US birth rate exploded from 2.5 million a year to 3.4 million a year, producing about 76 million baby boomers. Now, as baby boomers turn 65 and retire, they are collecting social security checks and going on Medicare, placing an enormous strain on financial resources across the country.

Just as the US is struggling to support the aging boomer population, the world will soon be required to deal with massive numbers of aging, out-of-commission solar panels. And with the solar industry predicted to grow 6500% by 2050, this problem will only get bigger in the future.

While solar is lauded as one of the most environmentally friendly energy sources, the materials used in the panels themselves have raised concerns over the last few years.

Many arguments have been made that solar panels contain toxic chemicals that are not environmentally friendly. While this is true to a degree, it has often been greatly exaggerated, and other energy sources like coal or nuclear power, are much more harmful.

One study by Environmental Progress that came out in 2017 made big news, claiming that solar panels create 300 times more toxic waste per unit of energy than nuclear power plants.

However, many have since debunked this finding as a myth, arguing that it misrepresents which materials qualify as “waste” and exactly how toxic they are. Obviously, very low-level waste materials like glass and steel used in solar projects will have much less of a harmful impact than high-level radioactive waste from nuclear plants, like uranium. Yet the study equates the two, making the situation seem much more dire than it really is.

A spokesman for the Solar Energy Industries Association said the study was incorrect and that panels are mostly made up of easy-to-recycle materials that can be successfully reused at the end of their life.

Other experts have confirmed that most residential solar panel installations are made of safe, silicon-based materials, and, while some thin-film panels may contain lead, cadmium, and other toxic chemicals, they are no different than the chemicals found in other electronics, like phones and laptops. And no one is sounding the alarm over these products. Plus solar panels have an average lifespan of 25 years, which is a lot longer than your average electronic device.

The concern is that solar panels in landfills might break and leak toxic chemicals into the earth. However, this is not as large a concern as originally thought. Studies have shown that metals from most panels are not likely to leach from modules under normal conditions, as these chemicals are securely contained between panels of glass. This is a bigger problem when panels are damaged in storms or fires, or cheaply made by poorly regulated manufacturers. In these cases, we need to make sure to collect and dispose of panels properly.

In the end, solar panels are just like any other type of hazardous e-waste, and should be disposed of similarly to phones, computers, batteries and other materials.

There is still concern over how to handle this waste. But it isn’t the end of the world, so long as we put measures in place to handle it, with recycling measures potentially able to negate the risk altogether.

In reality, the main problems from solar panel waste stem from regulations, or lack thereof. We don’t need different materials, we just need better legislation in place for handling of the existing solar panel materials, from start to finish.

The environmental impact of solar panels varies wildly between manufacturing facilities due to poor regulations in some areas, with little to hold companies accountable.

One of the biggest problem areas is China, with poor manufacturing practices, a carbon footprint double that of panels made in Europe, and little to no measures in place for recycling and disposal.

Since half of the world’s solar panels are made in China, this has a huge impact on global environmental initiatives.

What Can Be Done?

One thing you can do right now to reduce solar’s impact on the environment is to check the Silicon Valley Toxics Coalition’s Solar Scorecard before buying panels for your home.

The Solar Scorecard ranks solar manufacturing companies on their environmental protection measures. By buying only from manufacturers that are using the most sustainable practices, including recycling, consumers can lead the way for change in the market through demand for better processes and products.

We can also work to put much-needed laws in place to regulate the manufacturing and disposal processes, though this will require a bit more time and legwork.

Recycling programs are the next best way we can make sure dead solar panels are put to good use and don’t come back to haunt us as pollutants. Recycling mitigates a huge amount of the risk of toxic waste, and is a much more green solution.

To read more about solar recycling, check out our article, Life After Death: Recycling Solar Panels.

Ready to go solar at home?

Design the perfect solar array for your roof with the HahaSmart DIY Design Tool.

Then, check the price of panels in your area with the HahaSmart Price Checker to get the best deal.