A Deep Look Into Photovoltaics 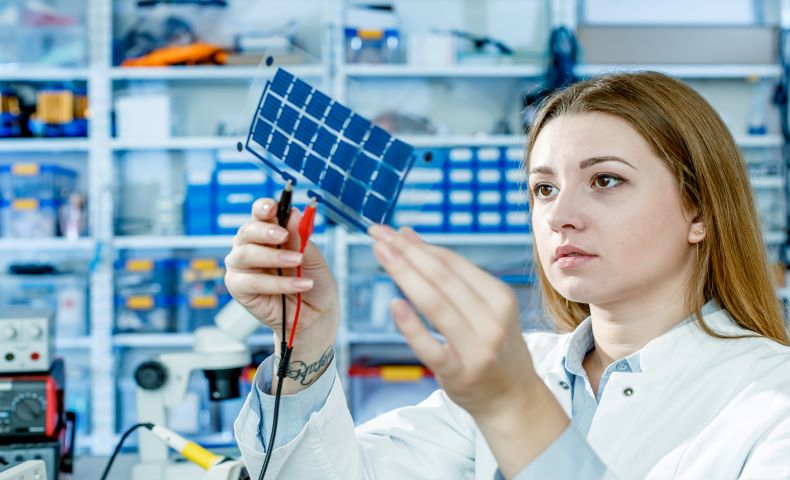 A Deeper Look Into Photovoltaic Cells

Devices that have photovoltaic cells generate solar electricity directly from sunlight through an electronic process that naturally occurs in certain types of material called semiconductors. Electrons in these materials are freed by solar energy and can be induced to travel through an electrical circuit, powering electrical devices or sending the solar electricity to the grid.

Solar devices that have photovoltaic cells can be used to provide solar power to anything from small electronics like calculators as well as road signs up to homes and large commercial businesses.

How does the Photovoltaic Cells Technology Work?

The way that photovoltaic cells work is the photons strike and ionize semiconductor material on the solar panels, which will cause outer electrons to break free from their atomic bonds. Because of the semiconductor structure, the electrons are then forces in one direction creating a flow of electrical current. The photovoltaic cells are not 100% efficient in crystalline silicon photovoltaic cells, in part because only certain light within the spectrum can be absorbed. There’s some light spectrum that is reflected, some are too weak to create solar electricity (infrared) and some (ultraviolet) creates heat sole energy instead of solar electricity.

Other Types of Photovoltaic Technology

In addition to crystalline silicon (c-Si), there are two other main types of photovoltaic cells technology:

Building-integrated photovoltaic cells serve as both the outer layer of a structure and generate solar electricity for on-site use or export to the grid. Building-integrated photovoltaic cells that are on solar-powered systems are able to provide savings in materials as well as electricity costs, they can also reduce pollution and add the architectural appeal of a building.

The History of Photovoltaic Cells Technology

The effect of photovoltaic cells was observed as early as 1839 by Alexandre Edmund Becquerel and was the subject of scientific inquiry through the early twentieth century. In 1954, Bell Labs in the United States was the first to introduce the solar device with photovoltaic cells that produced a usable amount of solar electricity, by 1958, photovoltaic cells were being used in a variety of smaller-scale scientific and commercial applications.

The energy crisis of the 1970s saw the beginning of major interest using solar panels with photovoltaic cells to produce solar electricity in homes as well as businesses, but prohibitive prices (nearly 30 times higher than the current price) made large-scale applications impractical.

Industry developments and research in the following years made devices with photovoltaic cells more feasible and a cycle of increasing production and decreasing costs began which continues even today.

The Costs of Solar Panels with Photovoltaic Cells