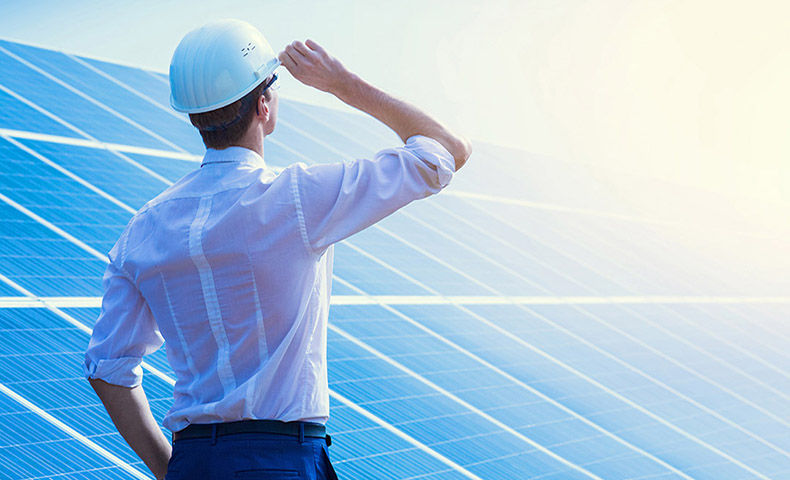 A heat wave is rolling across the southeastern United States, shattering records amid unwavering drought conditions.

Savannah, Georgia; Knoxville, Tennessee, South Carolina and Florida have been baking in unseasonably warm weather. And it’s not officially summer yet.

The Summer Solstice will take place on Friday, June 21st and from then on it will be three or four months of hot weather across the country.
That means plenty of sun for those with photovoltaic (PV) modules in their property, who also get an added bonus from their solar panels - they help keep the house cooler.

Researchers at the University of California San Diego decided to have a closer look at the panels' cooling effect to see how big it is and what kind of panel orientation provides the biggest benefits: "Using thermal imaging, researchers determined that during the day, a building’s ceiling was 5 degrees Fahrenheit cooler under solar panels than under an exposed roof."

“The amount saved on cooling the building amounted to getting a 5 percent discount on the solar panels’ price, over the panels’ lifetime. Or to put it another way, savings in cooling costs amounted to selling 5 percent more solar energy to the grid than the panels are actually producing— for the building researchers studied,” the study noted.

When you install a home solar energy system on your roof, you’re helping to protect it. Besides turning sunlight into electricity, PV modules act as a buffer between the elements and your roof, helping to extend its life.

Rather than the sun beating down onto the roof, which causes heat to be pushed through the roof and inside the ceiling of the building, solar panels take the sun beating. Then much of the heat is removed by wind blowing between the panels and the roof. The benefits are greater if there is an open gap where air can circulate between the building and the solar panel, so tilted panels provide more cooling. Also, the more efficient the solar panels, the bigger the cooling effect, according to the UCSD researchers.

Contrary to what many people think, the solar panels are not directly placed on top of the roof. They are mounted on racking that is attached to the rafters. There is typically a 3"-6" air gap under the panels to allow airflow underneath. So, it's like putting a giant shade structure over your roof that helps dissipate the heat instead of being captured in the attic.

Solar can run your AC

Apart from cooling the interior of the house, solar panels can also run your air conditioning unit.

Martin Cohen, a former teacher, explained in an online message board that “in practice, solar panels in places like California and Arizona do power air conditioning units. The panels produce the highest rate of electrical power on summer afternoons when the sky is clear and the days are long and the sun is at its highest angle. That is also when people are running their air conditioners the most.

Energy savings website Bijli Bachao! Indicates in a posting that “an air conditioner also consumes a lot of energy during its operation. Depending on the tonnage of the AC and heat load in a room, an AC would consume about 1 to 2 units of electricity in an hour. A 1 kW Solar PV Panel would produce about 5-7 units in a day, which can get consumed in 4-5 hours of continuous running of an air conditioner. If other appliances in a setup are also added then the need of energy increases. And if the use of air conditioner is more, then the kW of solar panel required would be more.”

A median-sized domestic solar power system in the United States runs about 5 kW, which should be plenty of power to run your air conditioning unit for a few hours, but now 24/7.
To find out how much a residential solar panel system of this size will cost you, you can access the Hahasmart price checker. Just provide your address and your average monthly utility bill and you’ll get the actual price of solar panels and inverters that match your electricity needs. You’ll also get an estimated cost of installation based on thousands of completed solar projects in your area.

They’ll even explain the estimated buyback period, the point where the electricity savings achieved with your solar array cover the purchase of your residential solar panels and your system becomes free.

In addition, they’ll connect you with their installer network to get your residence equipped with solar power as quickly as possible.

But don’t think you can run a central air conditioning unit on solar power alone. Those require a lot of power to run constantly, and for that, you will still need to get power from the electric grid.