What’s the difference between net metering and feed-in tariffs? 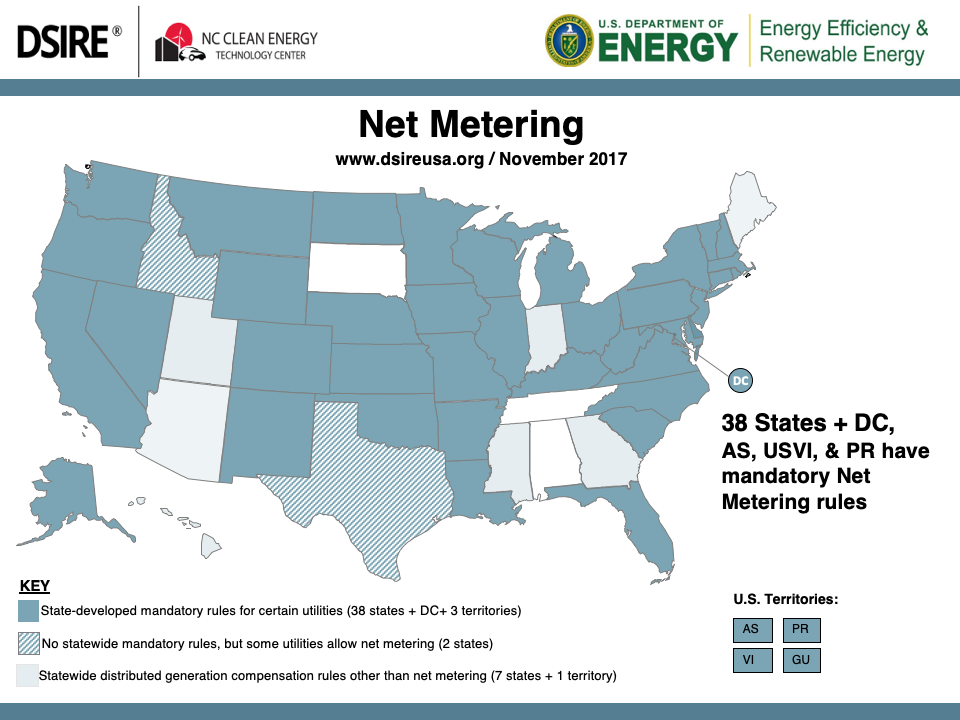 They both help you accelerate the payback period on your solar energy investment by allowing you to be compensated for the electricity you put back into the grid, but there are real differences between net metering and feed-in tariffs.

According to an article in the Energy Information Administration (EIA)’s website, ““Both net metering and feed-in-tariff programs have many different forms. But in general, net metering arrangements typically involve utility customers being effectively reimbursed at the retail electricity rate, with generation fed onto the grid counting against their usage bill on a kwh-for-kWh basis. In casual wording, we sometimes refer to this as ‘dialing the meter backwards.’ Net metering arrangements generally do not require that customers have two separate meters. FITs, on the other hand, are agreements that utility customers feed generation onto the grid at a predetermined tariff rate for a given period of time. Customers may be required to separately meter the generation qualifying for the FIT, and consumption and generation will be two distinct line items on the customer’s bill.”

Different states and utilities have their own version of these programs, and you could be be tied to either one of them.

Most of the states in the country have net metering programs, covering thousands of homeowners with domestic solar power systems.

Under net metering, the utility gives you credit for the energy you send to the grid. If your installer thoroughly analyzes your electricity usage, the contractor will be able to recommend the correct size of your home solar energy system to cover if not all, but most of the power you use on a daily basis.

If you want to know how many panels are needed to cover your individual energy needs and how much it will cost you, you can easily find out with the Hahasmart price checker. Just provide your address and your average monthly utility bill and you’ll get the actual price of solar panels and inverters - which are the most critical parts of a solar powered system - as well as provide you with an estimated cost of installation based on thousands of completed solar projects in your area.

Your solar panels only work when it’s light outside, and thus, their maximum productive period will be in the middle of the day, often when you use the least amount of electricity because most of the members of the household are usually at work, school, or in other endeavors. So a good part of the power generated during that time will go unused.

With net metering, your inverter will send the electricity you’re not using to the grid in exchange for future credit. Depending on how much power you send to the grid and how much you use at night, you could have net zero energy usage, where you eliminate your electricity charges and usually only pay the fees and maintenance charges in your utility bill.
According to the Solar Energy Industries Association (SEIA), on average, only 20-40% of a solar energy system’s output ever goes into the grid, and this exported solar electricity serves nearby customers’ loads.

Net metering is undergoing changes in a lot of states. Initially, solar owners were paid full retail electricity rates for any power generation they sent back into the grid. Essentially they paid what they use, minus what they sell.

This was in the early years of home solar energy, when not many people had domestic solar power systems. But with the expansion of solar installations, nationally, utilities have balked at this calculation, arguing that those without solar subsidize those with it by paying higher fees for transmission and delivery.

Now utilities are also using another calculation - Time of use (TOU) energy rates, where they charge more for power during peak energy usage. This could greatly change how energy exported to the electric grid is priced compared to the power you import from it.

Unlike net metering, which does not require any special equipment, feed-in tariff programs do require one extra power meter to be installed in your home to measure the outflow of electricity independently.

Feed-in tariffs - which are most common in Europe and Asia - are designed to provide a fixed-price incentive to guarantee a certain level of benefit for each unit of electricity produced by your solar panels over a long-term contract, typically 10 to 20 years.

The cost for electricity consumption and generation is priced separately.