Why should solar panels be installed in an angle? 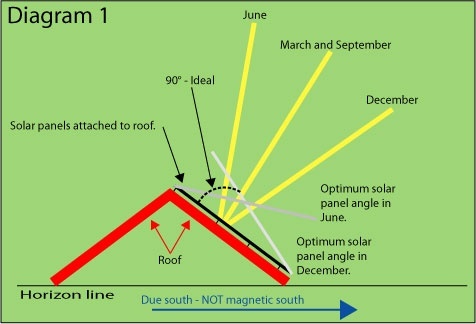 Why Should you Install Solar Panels at an Angle

Contrary to what many people may believe, solar panels are not placed flat, on top of the roof. They are mounted on racking that is attached to the beams of the house, allowing for air flow between the panels and the roof to prevent overheating.

And they’re not laid flat. Instead, they go in an angle.

The simple answer is that photovoltaic (PV) modules need to be pointed in the direction that captures the most sun.

By positioning the solar panels at an angle and a tilt, they’ll be perpendicular to the sunrays and you’ll generate more electricity.

“At the equator, the sunlight is perpendicular to the earth and the latitude is 0 degrees and hence the solar panels are placed flat. The angle keeps increasing with increase in latitude. Also, the panels have to face towards the equator for the same reason. Hence, solar panels in Northern Hemisphere are placed facing South while in the southern hemisphere they are placed facing north,” explains Rajesh Sinha in an online message board dedicated to solar panel questions.

When a contractor installs your solar panels, he should calculate for this when designing a layout for a solar array, so you get the most sun based on your location. South-facing roofs receive the most sunlight, and therefore the most solar energy during the day

“The idea is to optimize the total yearly electricity generated utilizing the higher efficiency of the cooler days, longer days in the summer, days with the clearest weather, based on the expected conditions at the installation site over the course of the year,” says engineer Ted Panofsky.

But don’t trust your compass to find true south. Those devices measure magnetic south, which is different. Magnetic forces in the Earth’s core pull the compass needle away from north and true south, so you might get an inaccurate reading.

For a more exact measurement, you can check out the National Oceanic and Atmospheric Administration (NOAA) calculator.

Unless you have a flat roof, the top of your house probably already has its own tilt, or slope. The solar installer should account for this before the solar panels are mounted on the home’s roof.

If you have the budget and space, you can opt for a ground-mounted solar array with trackers that allow for movement of the solar panels during the day - and seasons - to get the most sun exposure. Tracking systems either rotate on a single axis (typically east to west) or on a dual axis, which move in a more direct, circular path.

But more than likely, the solar modules will be fixed during the entire year, and tilt also helps panels get the most sun annually.

Since the position of the sun varies during the year - at lower altitude during winter and holding higher position during summer - the tilt is always calculated to obtain maximum energy during the entire year.

If you’re not going to be moving them, the tilt should be set equal to your latitude.

For instance, Los Angeles, California is located at a latitude of 34.0522° N. You’d be just fine if you set your panels at 34° and left them untouched.

However, for a more exact measurement, the website solarpaneltilt.com, provides the following formula:

Also, if you live where there is snow, adjusting the panels to a steeper angle in winter makes it more likely that they will shed snow. A panel covered in snow produces little or no power.

Tilt also offers a couple of other advantages. One, it frees space and allows more solar panels since keeping them flat would take more space. It also ensures that there is no water clogging under them in the rainy season.