The Components of a Solar System 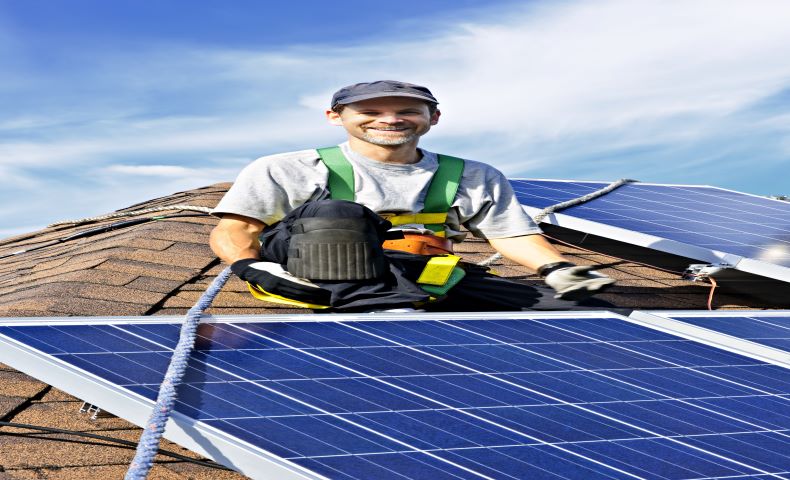 The components of a solar system explained

A home solar powered electric system isn’t just made up of solar panels, it requires a few different components to create electricity. The electricity that is created can be used to create power for your whole house.

The solar panels are normally the only thing that people associate with a solar system because that is the only noticeably visible component of the panels. The panels are installed on the rooftop and the part of the solar system that converts the light to power.

The Photovoltaic effect is the process of turning the sunlight to electricity. The solar panels get output ratings that are given in watts. The rating is the maximum power that is produced by the panels in the most ideal of circumstances.

The solar panels and their batteries produce direct current (DC) power, but the standard home requires alternating current (AC) power. The inverter is what converts the unusable DC power, produced by the solar panels, to the usable AC power, that is needed to power a household.

There are a few different options for inverters that are available for purchase.

Also recognized as a "centralized inverter," a string inverter points to a single string technology that attaches your solar array to the electrical panel of your home. String inverters are the least costly inverter choice you’ll find, but they aren’t ideal for every situation. They connect your solar panels to your home’s power infrastructure as an individual unit, which means that if one panel in your system isn’t performing well due to a shading problem, your entire array’s production will drop until that single panel recovers.

Differently, than string inverters, micro-inverters are fastened individually to every solar panel, which maximizes energy creation for your array. In the instance given above, if a single panel is shaded or obstructed by a cloud throughout the day, the rest of your solar system’s power creation won’t be affected because each panel has its micro-inverter. Micro-inverters also give panel-level performance monitoring in your array, which is a huge plus for homeowners struck to be closely tracking the output of each solar panel. Though they are the most efficient technology option, micro-inverters are also the most costly.

Solar panels are mounted in arrays that are typically mounted on a roof, on poles in free stranding arrays, or directly on a ground mount.

The most common mounting system is a roof mounting system and is required in certain ordinances. The is typically the most efficient for household solar systems as well that many people consider to be the most aesthetically pleasing.

One of the the downfalls to the roof mounting systems is the maintenance. On the high rooftops it can be a problem when it comes to clearing snow off the system or repairing the system. Though panels don’t require very much maintenance, but there are occasional maintenance that is required and by maintaining your panels you can increase the solar panels lives.

Ground mounts systems are low and perhaps the simplest of the mounting systems, but they can’t be used in areas that get a lot of snow. Another concerning factor that many will take into consideration is the space that the ground mounted arrays will take up.

It doesn’t matter what mount the arrays are, all mounts are either fixed or tracking, The fixed mounts are a preset for a height and angle and they don’t move. Because the angle of the sun changes through the year, the height and position of the panels are set to receive the prime amount of sunshine. This is least complicated and least expensive of of the solar panel installations.

The tracking arrays move when the sun moves, they move in the direction that sun does and will adjust their angle in the best way to maintain the optimal amount of sunshine.

The electricity that comes from a solar power system is produced during the daytime because it relays on the sunlight to produce power. Because your house will need power at night as well as on cloudy days, the battery pack can be added to the system to offset the issue.

The systems that aren’t tied to the utility grid, a back up generated is used to provide power for the days that the panels don’t have that high of a power output, due to bad weather or an increase in household power demands. For the homeowners that are concerned with the environmental impact of the generators, there is the option of solar generators.

The breaker panel is where the power source joins the electrical circuits that gives your household power. With each circuit comes a circuit breaker and the circuit breaker is what prevents the appliances on a circuit from drawing too much power causing a fire. If the appliances or whatever is plugged into the circuit are requiring too much power, the breaker will switch and stop the power flow.

The charge controller is also known as a charge regulator and it maintains the proper charging voltage for the battery system.

If they are fed a continuous amount of voltage, the battery can be overcharged. The controller regulates how much voltage is fed to the battery allowing it to charge when needed as well as preventing over charging.