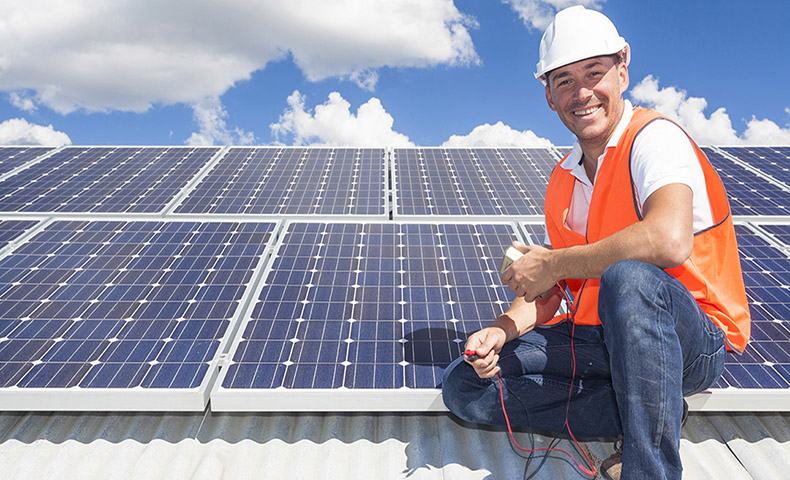 Those interested in solar power will be faced with a number of terms when researching the prices of solar panels and other equipment.

But solar power doesn’t have to be confusing or complicated. Below, we provide an easy and simple dictionary of common terms that you’ll come across, so you are better educated in this type of renewable energy source.

Alternating current (AC) - the type of electricity that comes out of your electrical sockets at home and powers your appliances.

Array - the collection of solar panels or modules wired together. The more panels you install, the more energy they will generate. However, depending on the efficiency of your panels, you can achieve the same amount of power with fewer modules.

Balance of system (BOS) - includes all components of a solar power system, other than the panels, such as wiring, nuts, bolts and more.

Battery - equipment that allows you to store the electricity generated by your solar power system.

Cells - solar cells made from silicon connected to form a circuit in a panel. There are two types, monocrystalline and polycrystalline. The easiest way to identify them is by their color, mono (black) poly (blue hue).

Community solar - solar farm or garden shared by multiple community subscribers who receive credit on their electricity bills for their share of the power produced.

Direct current (DC) - electrical current that flows consistently in one direction. It’s what you find in the electrical grid.

Efficiency - in terms of solar cells or panels, it refers to the percentage of sunlight absorbed and converted into electricity.

Grid - refers to the network of power lines that carry electricity for utilities.

Ground-mounted solar - a solar array installed on the ground, often with the use of poles and racking. Solar farms are set up in this fashion.

Inverter - these devices are the heart and the brain of the solar installation, converting the direct current (DC) generated by the photovoltaic (PV) cells in the modules into alternating current (AC). There are a few types, string inverters that connect all the panels together and feed the energy into a central system is the most common form. There’s also microinverters that attach to the each individual panel and do the conversion there.

kWh - abbreviation for kilowwatt-hours, a unit of energy. It represents 1,000 watt load operated over a period of one hour. Electricity rates are commonly displayed this way.

Microgrid - A microgrid is a local energy grid with control capability, which means it can disconnect from the traditional grid and operate autonomously.

Net Metering - most residential solar power systems are still tied to the electrical grid. Some utilities offer net metering, which allows you to send extra power generated by your panels into the grid, in exchange for credit or money.

Off-grid - refers to a solar power system completely independent of the electrical grid, often backed with a battery for storing the excess energy produced by your system during the day, which can be used at night.

Payback period - the amount of time it will take for your solar panels to generate the electricity savings to offset their cost. Often it’s between 6-8 years.

Peak sun hours - the number of hours per day when the sun’s intensity is the highest in your region. This changes through the seasons and is also affected by the time of day and the climate where your house is located.

Photovoltaic (PV) - this is technology that converts sunlight into electricity through a naturally occurring process in certain materials.

Power Purchase Agreement (PPA) - is a contract where a developer owns, operates and maintains the solar power system in exchange for the customer  allowing them to set up the solar array on their property and pay for the electricity generated at a predetermined price. Many churches or nonprofits who can’t afford paying for a solar installation on their own turn to these type of agreements.

Solar design or layout - the set up of the solar power system on your roof or ground, designed to maximize sunlight absorption.

Solar lease - agreement where the customer “rents” solar panels and equipment for a determined number of years. Often, there’s no initial investment, other than the monthly payment to the company that does the installation and it’s also responsible for the maintenance of the solar power system.

Tracker - mounting hardware used in ground-mounted solar installations enabling the panels to move and follow the sun throughout the day and even seasons to maximize energy output.

Tilt angle - refers to the positioning of the panels when facing to sun to maximize seasonal or annual energy production.

Zero net energy - refers to homes or buildings that generate as much electricity as they produce. If your solar installation covers 100% of your energy needs, your home would be zero energy.