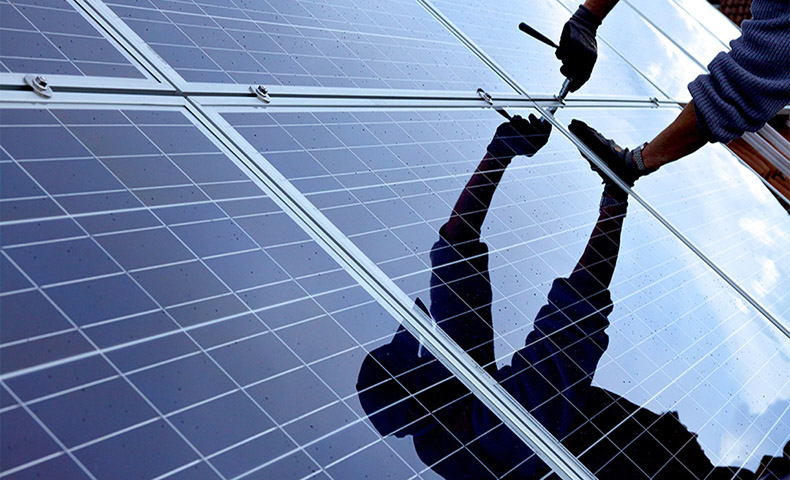 Solar power in the movies

Actor Leonardo DiCaprio is perhaps one of the most recognizable stars spearheading a green lifestyle and pushing projects to combat climate change and promote a more sustainable future.

He once told Radio National's Life Matters program that we should be using film to inspire climate change action with cool and fun solutions as well as the inclusion of aspirational products such as electric cars.

And Hollywood seems to be listening.

All stages and workshops were fitted with smart meters and equipment tied into the electricity grid to avoid the use of diesel generators.

Also, for the sequel to the environmentally-conscience and massively popular Avatar (2009), director James Cameron has decided to install a massive solar PV system on the roof of his production company Lightstorm Entertainment Inc.

But the push for renewable energy sources is also increasingly seen on the big screen.

There are several documentaries devoted to environmental causes and the dire consequences of global warming. Many of those films also make reference to solar power.

But as the installation of solar panels extends to home and business rooftops across the land, and it becomes widely used in all sorts of ways to power devices and projects all over the planet and beyond, it is also featured in mainstream movies with wider audience and impact.

Next Monday April 22nd is Earth Day and one way you can celebrate is by watching a few Hollywood gems this weekend that include this renewable source of energy.

Here are a few flicks worth their solar meter.

Johnny Depp is featured as the world's foremost authority on artificial intelligence, conducting highly controversial experiments to create a sentient machine, which he predicts will create a technological singularity, or in his words "Transcendence". But after an attack from an anti-technology group shoots him, in a desperate attempt to save his life, his wife uploads his consciousness into the computer, resulting in dangerous implications. The film gives close-ups of single water droplets and zooms out to an immense field of solar panels. It tracks the detailed regeneration of plants and human parts and then pans out to a digital fast-paced computer screen.

Several scenes in the film show the solar arrays aboard the International Space Station, which cover an area of over 27,000 sq. ft. which provide the 84 to 120 kW needed to power a base located 220 miles above Earth.

In the future, humanity is preparing to launch an attack on the homeworld of an alien race, called the Formics, that had attacked Earth and killed millions. In preparation for a possible next attack from aliens, this sci-fi action movie features a young boy, Ender Wiggins, who is recruited to protect Earth. When he’s sent to “Battle School”, you can see what looks like trees or plants covering the ground, which are in fact solar panel arrays used to power the base.

It’s a documentary, but it really sparked a renewed conversation over global warming as it featured the unlikeliest of movie stars, former presidential candidate Al Gore. Standing in front of an audience and just photo slides, it sent a dire warning about this issue and what must be done to save the planet.

In 2017, the former Vice President came back with An Inconvenient Sequel: Truth to Power, which continued Gore’s call for action on saving the environment, this time traveling the world training activists and trying to garner international climate policy.

If you like Matthew McConaughey and Penelope Cruz, you’ll enjoy this action-packed adventure film where the main characters are in search of a ship rumored to have vanished long ago with a hidden treasure. In the course of their search, they travel to a huge solar energy plant in the middle of the Saharan Desert. While a huge solar array is now being built in this remote location and scheduled to be completed by 2020, the one featured in the movie is generated by computer graphics.

This futuristic film showing a world where your genetic profile determines the opportunities available to you the rest of your life features renewable energy that comes into play in the form of rocket launches, plug-in vehicles and a large solar farm. You can see it in one of the scenes where main characters Uma Thurman and Ethan Hawke walk among real rows of solar panels at sunrise.

This comedic adventure includes Halle Berry as a new science teacher at a poor Hawaiian high school who after finding the students surly and unmotivated, handpicks eight of them and guides them in the design and construction of a solar-powered car. The car lacks the technology, but still manages to win the Hawaiian championship and they later travel to Australia to compete in a dangerous 2,000 mile trek across the Outback.

This documentary follows an unemployed American worker, a Tea Party activist, and a Chinese solar entrepreneur as they race to lead the clean-energy future. It focuses on the growth and future of the solar power industry and highlights how this source of renewable energy can not only help the planet, but the economy as well.

Switch: discover the future of energy (2012)

Powerful: energy for everyone (201)

If you want to go further than simply watching a "green" flick, perhaps you should consider adding solar panels to your roof. They are a great investment, as they will save you money in your electricity bill through their 20-25 year lifespan and in the meantime, you will also be reducing your carbon emission. And you can film the whole process if you want, perhaps as a personal movie.