The role of solar in curbing emissions 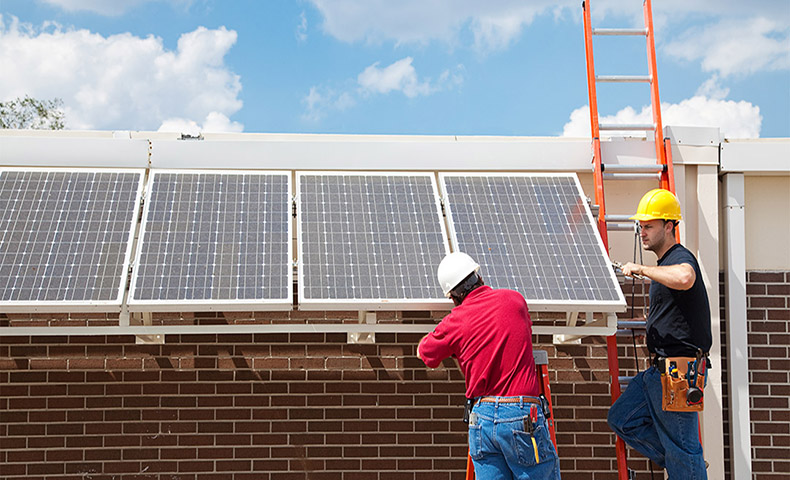 The news is dominated by climate events that are increasingly more worrisome. This summer, heat records are being broken all over the world and hundreds of deaths have resulted. Record high temperatures as far north as Japan have killed numerous people and threatens many more in countries as diverse as Canada, Europe, and here in the United States. For those who refuse to believe that global warming exists, the evidence has never been more obvious. How can we reduce our carbon emissions for a cleaner future for the earth? Solar energy is the best answer that currently exists for mankind to begin to reverse the trend toward global warming.

A significant amount of energy goes into manufacturing a single solar panel. Quartz and copper must be mined. The raw materials are then converted into wafers, then encased in protective material. After panels leave the factory, they are shipped to locations all over the world.

Now imagine these consequences spread over forty years and the environmental cost of making the panels. Considering all the research, development, and production that goes into making any one panel, a savvy solar shopper might wonder: Has the solar industry really saved much energy? The answer is obviously yes.

The solar industry has already paid its climate “debts”

The solar industry paid off its long-term climate “debts” in 2011, a study published this week in Nature Communications reports. Since its beginning in 1975, the solar industry has prevented more greenhouse-gas emissions than it emitted. It has also produced more energy than it initially required to produce. Consequently, the solar industry is now considered carbon-neutral, if not carbon-negative. The news comes at an odd time for the solar industry worldwide. The cost of solar-panel installation continues to drop. In some sunny parts of the world, solar energy is cheaper than fossil fuels, even without subsidies. Moreover, the American renewable-energy industry faces a hostile new presidential administration, which is already staffed with fossil-fuel executives who have indicated they may pull government loans and tax credits for the technology.

When the solar industry becomes net carbon-negative, it will stay that way, as solar panel manufacturing has become gradually cheaper, cleaner, and more energy-efficient over time. Fortunately, this will be helped by the extinction of fossil fuels. As expected, the carbon footprint of the solar industry is much smaller than that of the oil or gas business. For consumers, the researchers’ most general finding might be the most important. The solar industry is currently preventing more carbon emissions than it created.

Solar power is here to stay, and the sooner you explore how much you can save, the sooner you can enjoy the benefits of residential solar power. The climate experts report that we don't have any time to waste. Since we almost completely ignored their previous warnings about the catastrophic impacts of global warming, we are now experiencing emissions that were unheard of years ago. Methane has become a serious problem due to the uncovering of such a large quantity of Arctic ice. We can do our part to stop this idiocy by installing solar panels and using energy more efficiently. Are we willing to take even small steps to improve our situation? Fortunately, now we have incentives and reasonable pricing so that many of our home and business owners can afford to install a solar energy system. But we need millions of such installations to truly make a dent in global warming. The time is now to wake up to what we have done to our world.