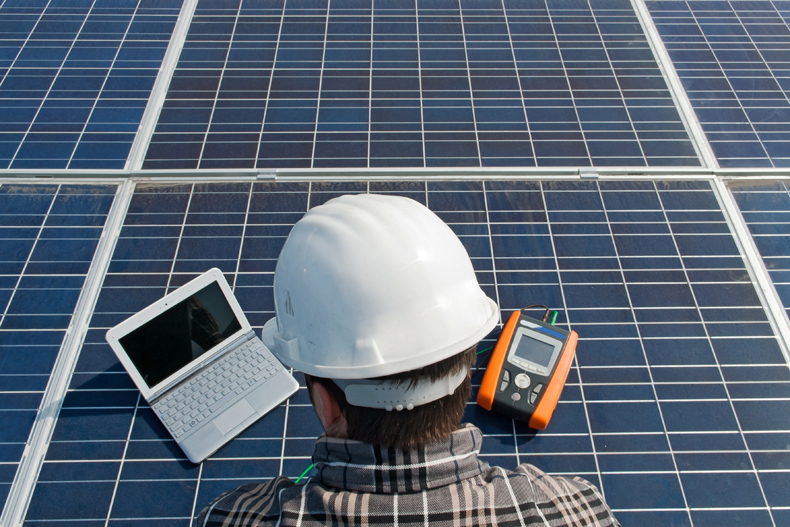 Solar panels are everywhere, but do you know how they actually work to generate electricity? Here we look at solar photovoltaic cells – the technology behind a solar panel and see how they work.

A solar panel is made up of six different components, but arguably the most important one is the photovoltaic (PV) cell, which actually generates electricity. The conversion of sunlight into electrical energy by a solar cell is called the photovoltaic effect, and that’s why we refer to solar cells as “photovoltaic.” There are many photovoltaic cells within a single solar panel. A standard panel used in a rooftop residential system will have 60 cells linked together, and commercial solar installations often use larger panels with 72 or more photovoltaic cells.

Photovoltaic cells, through the photovoltaic effect, absorb sunlight and generate flowing electricity. Here is the real technical version. In a crystal, like the bonds [between silicon atoms] are made of electrons that are shared between all of the atoms of the crystal. The light gets absorbed, and one of the electrons that's in one of the bonds gets excited up to a higher energy level and can move around more freely than when it was bound. That electron can then move around the crystal freely, and we can get a current.

First, light strikes a photovoltaic cell and is absorbed by the semiconducting material it is made from (usually silicon). This incoming light energy causes electrons in the silicon to be knocked loose, which will eventually become the solar electricity you can use in your home.

There are two layers of silicon used in photovoltaic cells, and each one is specially treated, or “doped”, to create an electric field, meaning one side has a net positive charge and one has a net negative charge. The electric field causes loose electrons to flow in one direction through the photovoltaic cell, generating an electrical current. Once an electrical current is generated by loose electrons, metal plates on the sides of each solar cell collect those electrons and transfer them to wires. At this point, electrons can flow as electricity through the wiring to a solar inverter and then throughout your home.